In a nutshell, Bored & Dangerous says: “I’d never say that The Unforgiven is a good movie. But I also can’t say that I wasn’t entertained by it.”

John Ford and John Wayne’s The Searchers is widely recognised as one of the greatest westerns ever made. In fact, when I wrote about it here on Bored and Dangerous, it was as part of my countdown of the American Film Institute’s Top 100 American movies. While the performance from Wayne is one of his absolute best, and the film making of Ford only gets more impressive with every rewatch, the political and social views haven’t aged so well.  So when I read that The Unforgiven (similar to Clint Eastwood’s 1992 masterpiece in name and genre only) was director John Huston’s answer to those troubling political and social views, I was intrigued to see what he had to say.  The Unforgiven is a response and polar opposite to The Searches. It just does something I had assumed was impossible, and presents something even more troubling than the movie it’s responding to.

With his father dead, Ben (Burt Lancaster) has become the patriarch of the Zachary family. There’s his old but spry mother Mattilda (Lillian Gish), hot head brother Cash (Audie Murphy) and adopted sister Rachel (Audrey Hepburn). It’s Rachel and her adoption that brings trouble to the Zachary clan and drives the plot of The Unforgiven.

Stranger Abe Kesley (Joseph Wiseman) arrives in town and brings with him a rumour that Rachel wasn’t saved by Ben’s father when he found her as a baby, the lone survivor of a white family attacked by Native Americans. According to Abe, she’s of Indian blood, and was stolen from her very much alive family by old man Zachary.  With a make or break cattle drive for the Zacharies imminent, and bloodshed still high between the white settlers and native inhabitants, getting to the bottom of Rachel’s origins could mean the end of everything for her adopted family.

While The Searchers is very clear about depicting Wayne’s character as a man whose refusal to change makes him in outcast in his (then) modern world, it also pretty much only presents the Native American characters through his narrow minded eyes. So while he is technically punished by the movie literally leaving him alone on the outside, looking in at the place where he should be with his loved ones as they find happiness in love and family, I feel like the movie is only judging him for mistreating his white friends and family. It never really questions his ruthless attitude towards the Comanche antagonists.

The Unforgiven surprised me by managing to be even less concerned with fleshing out its Indian characters, and even worse, determined to slap on a sappy happy ending, complete with a declaration of love and that the death of a few one dimensional injuns will lead to a happy ever after for Ben and his adopted sister who is now also his fiancé.  Spoiler.  Creepy spoiler. 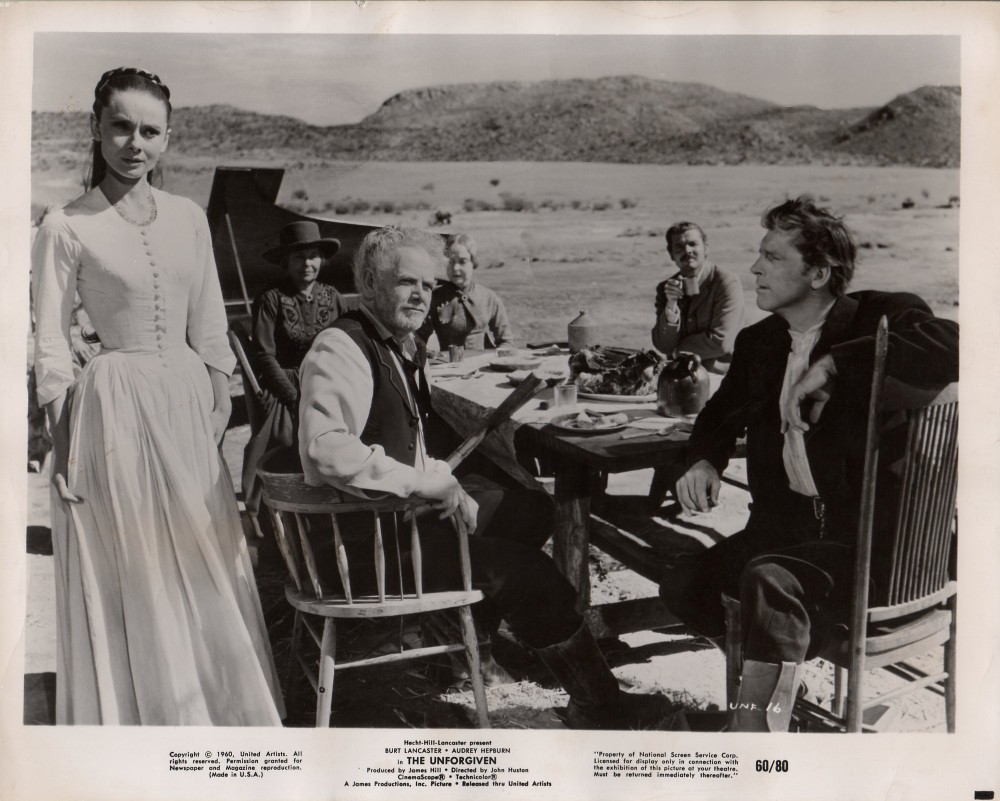 I would never say that The Unforgiven is a great movie. I’d never even say that The Unforgiven is a good movie. But I also can’t say that I wasn’t entertained by it.  Turns out, even with a dumb story and offensive attitudes toward race and gender equality, Burt Lancaster is still Burt Lancaster and Audrey Hepburn is still Audrey Hepburn. For me, Lancaster spitting out tough guy resolve through his gritted teeth will always be worth watching, Hepburn doing anything will always be irresistibly charming, and the western will always be entertaining to some degree.

The Unforgiven
Directed By – John Huston
Written By – Ben Maddow