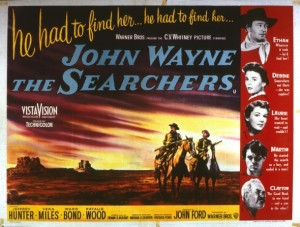 “Figure a man’s only good for one oath at a time. I took mine to the Confederate States of America.”

I like westerns in general. I recognise that there is probably no duo who has influenced the genre more than director John Ford and actor John Wayne. I’ve known of The Searchers and its amazing reputation for years. Even Martin Scorsese, my own hero in the world of cinema, rates at as one of the greatest movies ever made. So why have I never seen it until now? Maybe that reputation was a little overwhelming.


It wasn’t that I thought it couldn’t live up to the hype, it was exactly because I was sure it would. You can only see a movie for the first time once, so when I was all but certain it was going to be amazing, I got a bit anxious about that first time. Sort of like every female character in every 80s movie about high school kids. Then I bought a new telly. A glorious 55 inch bastard with all the fruit. That was when I knew it was time to tackle the Johns, Ford and Wayne, and The Searchers.

Returning to his brother’s Texas ranch after the Civil War, Ethan Edwards (Wayne) is cashed up and ready to help when the local reverend, who also happens to be the leader of the local Texas Rangers, arrives looking for help tracking some Comanche Indians who have killed a neighbouring rancher’s cattle. Insisting his brother stays at home with his wife and three kids, Ethan heads off with the rangers, as well as his brother’s adopted, part Indian son, Martin (Jeffrey Hunter).

On the hunt, too far from home to help, Ethan comes to the horrible realisation that the dead cows were just a decoy, a way to lure the rangers and their guns away from the now vulnerable ranches. When they finally make it back, Ethan’s brother and sister-in-law are dead, as well as their young son. There is some hope however, that his two nieces are still alive, captives of the Comanche. It’s not long before Ethan finds the murdered body of the older daughter, but he won’t be discouraged. And so begins a five year search by Ethan and Martin, scouring the Texas desert, looking for the youngest daughter, Debbie (eventually played by Natalie Wood).


The Searchers is some cold ass shit. Ethan Edwards hates the Comanche Indians with a blind passion and clearly sees them as less than people. The interesting thing about The Searchers is though, it clearly recognises this bigoted attitude as a massive weakness of Ethan’s, and even condemns him for it. Yet, it still finds a way to make him the hero of the movie. It’s a kind of flawed character that I didn’t think existed in westerns of this vintage.

Sprawling and epic, while essentially a story about two men and their search for one woman, The Searchers is a great mix of the big and small. There are the massive vistas and gorgeous location shots in Monument Valley. But we also get sound stage scenes of obvious fake, but charmingly so, painted backdrops and sets. There are the communities of white Americans, Native Americans and Mexicans, yet their entire stories are conveyed mainly though the two main male characters.

Other Opinions Are Available. What did these people have to say about The Searchers?
Martin Scorsese
Roger Ebert
Not Bad Movie and Book Reviews