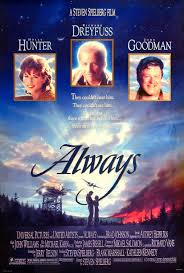 For a director who’s made more at the box office than any other film maker, I’m surprisingly ambivalent towards Steven Spielberg.  Jaws is undeniably awesome, the original Indian Jones Trilogy is great and Schindler’s List deserves every bit of praise it ever got.  Then there’s his clunkers, like The Terminal  and Catch Me If You Can.  But everything else in his immense filmography is just kind of OK to me.  Nothing too amazing, nothing too terrible.  Just a whole lot of watchable, if not re-watchable, average stuff.


But even with my disinterest in Spielberg, I’m still generally very aware of his movies and their existence.  So when I watched Always, based purely on it being Audrey Hepburn’s last movie, I was surprised to see it had a pretty great cast of big names, and that it was made by Spielberg.  How underwhelming must Always be for it to be so overlooked and seemingly forgotten in the Spielberg canon?

Pete (Richard Dreyfus) and Al (John Goodman) are firefighting pilots.  They fly dangerous missions dumping water on raging forest fighters.  In the control tower is Dorinda (Holly Hunter), Pete’s girlfriend.  After taking one too many risks and scaring her one too many times, Dorinda tells Pete he needs to settle down or lose her.  Coincidentally, Al is trying to convince him that they should take steadier, safer jobs teaching other pilots to fly these fire missions at a new training school in Colorado.

After a pretty spectacular incident (it happens too early to consider it a spoiler, but it’s unexpectedness did make it pretty great, so I won’t go into details), Pete ends up taking goofy young dreamboat Ted (Brad Johnson) under his wing.  All of this with a touch of the super natural that introduces Audrey Hepburn as Hap, basically God.

Being a Spielberg movie, a certain amount of sentimentality and sickly sweetness is a forgone conclusion.  But the beauty of Always is that it has a sense of humour to its sickly sentimentality.  Richard Dreyfus’ Pete is a smartass who, for the most part, keeps enough of a cynical detachment from the emotion to make sure it’s never too overwhelming.  And Goodman’s character is basically that of the loud mouth best friend who refuses to take anything seriously, so he keeps the edge off as well.

Always is a bunch of great actors giving pretty great performances, but I can see why I’ve never heard of it before, despite its pedigree in front of and behind the camera.  There’s just not much to it.  Sure, it wants to make some grand statements about love, life and happiness, but none of those statements are new, or nothing you haven’t seen in plenty of other, better movies.  I feel the same way about Always as I do about most Spielberg movies.  There are worse ways to spend a couple of hours, but I’m sure I‘ll forget about it completely soon enough.

Considering I watched this movie for Hepburn’s final screen appearance, she gets very little attention above.  Because her role here is basically a cameo.  But here are her swansong stats anyway…