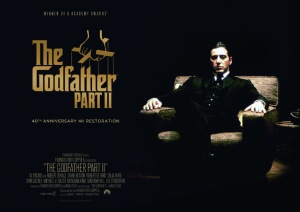 “Do me this favor. I won’t forget it. Ask your friends in the neighborhood about me. They’ll tell you I know how to return a favor.”

With The Godfather, Francis Ford Coppola accomplished two pretty amazing things.   He turned an entertaining, but ultimately pretty trashy novel into a filmic masterpiece.  And fought a major movie studio all along the way that hated him, his casting choices and pretty much every artistic decision he made, and he came out the other end with an a multiple Oscar winning blockbuster.  But what’s even more impressive than all of that?  Making a sequel that many would argue is even better than the original.  I love them both too much to declare one better than the other, but I also have no problem with people who firmly believe that The Godfather Part II is the superior film.  That’s how amazing this movie is.


After settling all family business at the end of the first movie and fully succumbing to his darker side, the once idealistic Michael Corleone (Al Pacino) has taken his already powerful crime family to new heights. Where they were once a strong New York organisation whose leader carried senators and judges in his pocket like so much loose change, Michael has taken the Corleones international, with gambling concerns in Las Vegas and the soon to be overthrown Cuba.

Flash back to Sicily at the turn of the century, and we see Michael’s father, Vito as a young boy.  It’s the funeral for Vito’s own father, who was killed by a local mafia boss.  Fearing revenge, the boss kills Vito’s brother and has plans to kill Vito as well.  Hidden by family and friends, Vito is eventually smuggled out of Sicily and finds his way to New York.  As a young man, now played by Robert De Niro, Vito realises that nothing is ever given, it must be taken.  And he quickly rises from local grocery store stock boy, to neighbourhood boss, by eliminating his competition.

One of the things that made Coppola’s adaptation of the novel for the first Godfather movie so brilliant was his instinct to know what to keep in, and more importantly, what to leave out.  Not only which bad bits to leave out, like the overly involved side plot in the book about a vagina reduction surgery (seriously).  But also, which good bits to leave out.  The original story of Vito Corleone is amazing, but there’s no way a single movie could tell that story, and the story of Michael Corleone’s own decline into a life of crime, and do them both justice.

Not only did ignoring the story of young Vito leave more room to tell Michael’s story so amazingly, it left another, just as amazing story, ready to go for the sequel.  More than that, it’s also the perfect parallel to Michael’s story in Part II.  Cutting back and forth from Vito’s rise from nothing before the first World War, and Michael’s mammoth professional success at the expense of his own soul in the 50s, makes for one of the most devastating stories ever told.

The Godfather Part II is an amazing piece of work.  I think I must have seen it at least 20 times since I discovered it as a 12 or 13 year old.  It’s the perfect level of dense and complex, without every becoming convoluted or messy.  I think to this day, I still notice little details and story points that have evaded me on every previous viewing.  And all of those new details juts make it better and better every time.

Other Opinions Are Available.  What did these people have to say about The Godfather Part II?
Roger Ebert
The New York Times
ireckonthat