“That’s the toughest opponent you’re ever going to have to face.”

In the vast majority of cases, sequels are inferior to the movies that that preceded them in the series. Sure, there’s the odd Empire Strikes Back, or The Godfather Part II, but they are rare exceptions to an almost irrefutable rule. A rule that’s even more concrete is that the longer a series goes on, the sharper the decline in quality will be, with each entry delivering diminishing returns. The Fast and the Furious bucked this trend by embracing and enhancing all of its goofier tendencies from Fast 5 onwards, and it’s been bonkers fun ever since.


A decade or so ago, Sylvester Stallone revived his career making character, Rocky Balboa, for a movie of the same name. Considering the cartoon levels of overblown trash that was Rocky IV, and the failed attempt to go back to his roots that was Rocky V, the artistic and financial success of Rocky Balboa was a surprise to everyone. And it was a nice way to wrap up the series on a high. But the Italian Stallion and his world are apparently too good for Hollywood to leave behind. Because the baton has been passed to a new generation, and I have heard nothing by rave reviews for Creed.

The illegitimate son of Rocky’s first nemesis, later to become best friend Apollo (Carl Weathers), Adonis Creed (Michal B Jordan) is pulled out of juvenile detention and raised by Apollo’s widow (Phylicia Rashad). But all the money and good schooling in the world can’t change Adonis’ genetic code. And soon he’s quitting his white collar job and pursuing his dream to follow in his father’s footsteps as a boxer. When Tony ‘Little Duke’ Burton (Wood Harris) rejects Adonis form his prestigious boxing academy, the young hot head travels to Philadelphia, in search of coaching from former champ, current restauranteur, Rocky.

Determined to leave that world behind, Rocky is reluctant to help Adonis, but a bond is quickly formed. And soon, Rocky is training his new protégé in the old fashioned ways that lead to his own legendary career. Meanwhile, Little Duke had been training his own fighter to go after the world title against British bruiser, ‘Pretty’ Ricky Conlan (Tony Bellew). But an out of ring incident means Pretty Ricky is short an opponent, just as Adonis starts to make a splash on the local boxing scene.

OK, so I’ll start by saying this about Creed, it’s good. It’s really, really good. It’s a whole lot better than the seventh entry in any series usually is. But anyone talking about it as a Best Picture contender at the Oscars, or about Stallone being a Best Supporting Actor nominee need to calm down. This is a solidly made, well acted, satisfying sports movie, but that’s it. And it’s definitely worth seeing. There’s just no way it’s up there as one of the year’s best. 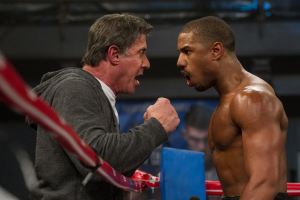 The first movie in the Rocky series not to be written by Stallone, director and co-writer Ryan Coogler does a brilliant job of giving the characters and story new life and dragging it into 2015, while staying true to the 40 years of established canon. Fans of the series will find plenty of comforting references to what they’ve always loved, while new comers get a tight origin story.

Other Opinions Are Available. What did these people have to say about Creed?
The A.V Club
The Sydney Morning Herald
What Did I Just Watch