“You’re very smart, Joey. You’re giving me a lot of answers, but you ain’t giving me the right answer. I’m gonna ask you again: did you or did you not?”

Ordinary People was the second ever review I posted here on Bored and Dangerous. That was around two and half years and 1,200 odd reviews ago. In that time, I’ve never missed an opportunity to shoehorn in a reference to the fact that the tele-movie, cheap emotional manipulations of Ordinary People somehow managed to win the Best Picture Oscar over Martin Scorsese’s Raging Bull. There have been reviews that had nothing to do with either movie or a single person involved with them, and I have found a way to bitch about Ordinary People and its Academy Award win. And now that I have just re-watched Raging Bull, that Oscar cock up pisses me off more than ever.


In the 60s, a fat, old, washed up Jake LaMotta (Robert De Niro) awkwardly rehearses corny jokes, bad puns and an overall terrible cabaret act backstage somewhere that you can just tell is low rent. Forcing the words through his mangled nose, this is obviously s man who has fallen from grace. Cut to the early 40s when LaMotta was lean, rock hard fit and taking on all comers in the ring as professional boxer, the Bronx Bull. Always at his side is trainer, manager, sparring partner and brother, Joey (Joe Pesci). At home, LaMotta is dismissive to his wife at best, abusive at worst. When the teenaged Vickie (Cathy Moriarty) catches his eye at the local pool, Jake has to have her.

Always chasing that next big match, LaMotta’s rise up the ladder might be a little easier if he accepted the help of the local crime boss, but he refuses. Never for reasons of honour, but pure pride and ego. LaMotta wants the belt, but he wants to be able to be able to say he earned it by himself. Jake sees no glory in victory if it isn’t 100% his. But in the ring or in his personal life, LaMotta discovers he’s never happy, no matter how much he takes, usually by force.

This is a strange thing to say, especially since the black and white cinematography is one of the aspects praised most about Raging Bull, but it’s kind of ugly. I don’t mean that as a criticism, and I don’t even know if ugly is the right word, it’s just the only one I can think of. Maybe gritty is better. Whatever the word is to best describe it, it’s exactly the look that this movie needed. Jake LaMotta’s story shouldn’t be told in luscious beauty. It needs to be dirty, sweaty and a little threatening. It needs to be, well, ugly.

De Niro snagged a Best Actor Oscar for Raging Bull, and watching it this time around, I reckon he deserves it for two specific scenes, the opening and closing. As amazing as he is throughout, the young hot head outside the ring, the brutal monster inside it, it’s the old LaMotta that really made me notice how amazing De Nitro is. A great actor, portraying terrible acting is something you don’t see done well very often. Seeing De Niro portray the middle aged LaMotta stiltedly rehearsing his terrible stage act in the opening, then performing it for a crowd in a completely different, but just as terrible way towards the end, might be some of the greatest acting ever committed to film. 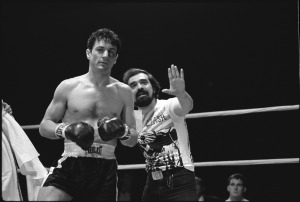 Last time I watched Raging Bull, I had never seen Ordinary People. I thought I was angry about that 1980 Oscar mistake for the last two and half years. Now, with Raging Bull fresh in my mind, I’m downright bloody ropable about it.

Other Opinions Are Available. What did these people have to say about Raging Bull?
Roger Ebert
Slant Magazine
PG Cooper