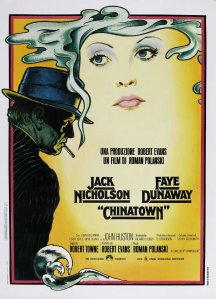 Film noir of the 40s and 50s is one of the most quintessentially American contributions to cinema.  But 30 years after its peak, it took a little Polish fella directing and one of the leaders of the American new wave starring, to make what might be one of the best examples of film noir, with Chinatown.


A former cop and now PI in 1930s Los Angeles, Jake Gittes (Jack Nicholson) is fresh off finding one cheating spouse when he’s commissioned to find another.  Evelyn Mulwray (Diane Ladd) is sure her husband Hollis is cheating, and she pays Jake to find the truth.  Tailing Hollis first leads to a town meeting where he opposes the construction of a new dam to help supply the drought ridden LA with water.  Eventually, Jake spots Hollis with a young woman, snaps a few photos and they end up on the cover of the paper the next day.

Which leads to a visit from the real Evelyn Mulwray (Faye Dunaway).  Realising he was duped by the fake Evelyn into following Hollis Mulwray, Jake decides to find out who set him up.  When Hollis shows up dead, drowned in a local reservoir, Jake is even more determined.  Soon, his investigations lead to Evelyn’s father, and Hollis’ former business partner, Noah Cross (John Huston).

This was the third time I’d seen Chinatown, and I think I appreciate it a little more every time.  The first viewing, it was all about the cool look and the great performances.  The second time, I took those a little for granted and concentrated on the intricate story and the dozens of pieces in play at all times.  This time around, I was familiar enough to understand the intricate story, and get lost in Nicholson, Dunaway and Huston’s awesome performances.

Combining stark colours and 70s naturalistic film making, with traditional noir tropes of the 40s, Roman Polanski manages to make Chinatown a particularly seedy entry into a genre known for seediness.  This version of LA isn’t about Hollywood, glamour and movie stars.  It’s about the ruthless, backroom deals that turned a desert into a place that could sustain Hollywood, glamour and movie stars.  And it’s that ugliness that makes it such a compelling, engaging world.  I can’t imagine anyone watching Chinatown would ever want to live there, but it’s an amazingly fascinating place to visit for a little over two hours.

Other Opinions Are Available.  What did these people have to say about Chinatown?
The Guardian
The Telegraph
Toby Saunders