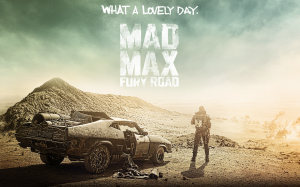 “I am the scales of justice, conductor of the choir of death!”

The original Mad Max was a bit of a touchstone moment for Australian cinema.  It launched the career of director George Miller, and it launched the career of future mega star and future known anti-Semite nut bar, Mel Gibson.  But it also gave Australian cinema in general a bit of a boot in the ass.  I’ve complained before on Bored and Dangerous about Australian cinema’s inferiority complex making the industry feel like they have to make important (ie. pretentious) movies.  But Mad Max showed that we could make low brow genre fare with the best of them.


I like the original Mad Max, and I Iove its sequel, The Road Warrior. But when I heard  Miller was rebooting the series, I was skeptical.  Had it really been that long since he had a hit that he had to rehash this old chestnut? But as buzz grew and trailers were released, and I found out man crush #1 Tom Hardy was involved, it seemed liked Miller might be returning to the well for the right reason…  He actually had a new story to tell.  By the time I saw Mad Max: Fury Road, it had been out for a week or two and had received more over the top, crazy praise than any movie I can think of in recent memory.  In the space of a year or so, I had gone from dreading this movie, to being more excited about it than anything else coming out this year.  Even Star Wars.  So, did Mad Max: Fury Road live up to the mega hype?

Max (Hardy) is a former cop, now nomad in a post apocalyptic, desert wasteland.  He’s carrying a lot of guilt about those who he was unable to save in the past, and has no real interest in building a future for himself.  He’s captured and taken prisoner by the War Boys, a group of violent marauders, lead by the dictatorial Immorton Joe (Hugh Keys-Byrne).  Meanwhile, Imperator Furiosa (Charlize Theron) has stolen a fortified truck from Joe and is using it to help a group of women, Joe’s “wives”, escape.

When Joe realises what’s going on, he leads a war party across the desert in an increasingly ridiculous and awesome convoy of suped up vehicles.  One, belonging to War Boy Nux (Nicolas Hoult) is even complete with a Max strapped to the front as a living hood ornament.  After an accident in a sand storm, Max escapes and ends up on board Furiosa’s war rig, helping the wives escape.

Mad Max: Fury Road takes the done to death idea of a post apocalyptic wasteland and ramps it up to new, horrific levels.  I can’t think of a single other movie that has ever been able to make something so gorgeous out of elements that are so ugly.  But that’s exactly what Miller has created.  It’s depressing and dangerous and horrible and dirty and basically hell on Earth.  But I loved being able to spend this two hours there.

When people think Mad Max, they generally don’t think about the original movie, with it’s almost regular people and regular cars racing down country roads just outside Melbourne.  They’re more likely to think of The Road Warrior world of Mad Max, with its deserts, bondage inspired costumes and general insanity.  And luckily, that’s the version of Mad Max that George Miller didn’t just bring back to life for Fury Road.  He brought it back to life and suped it up to glorious new levels of nut baggery.

Hardy’s Max is more brooding than Mel Gibson could ever dream of, Theron‘s Furiosa is a badass bitch complete with a scrap metal prosthetic arm who is more of a hero in this movie than the titular ex-cop.  And Immorton Joe is the kind of insanely ridiculous bad guy who only works because the movie never for a second worries about making him even close to real or believable or logical.  Of course he has a bloke in his war party whose entire job is to rock out with sweet riffs on his flame spewing electric guitar, while riding on the roof of a truck that’s nothing but guitar amps.  That’s the world of Mad Max: Fury Road, and it’s perfect in its bat shit craziness.