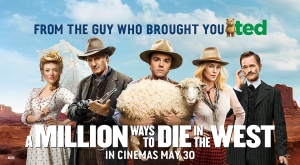 “You’re not even a good sheep farmer, Albert. Your sheep are everywhere. The one thing a sheep farmer has to do is keep all of the sheep in one place, all right? I went to your farm the other day, and I saw one in the back yard, three way up on the ridge, two in the pond and one on the roof.”

I don’t like Seth McFarlane’s Family Guy. I think it’s one of the laziest examples of comedy writing on TV. In a lot of ways, I think it’s throw-everything-at-the-wall-and-hope-something-sticks approach is even worse that what Chuck Lorre craps out on shows like Big Bang Theory and Two and a Half Men. Because of that, it took a long, long time, and one really bored afternoon before I ever watched McFarlane’s first live action movie, Ted. And I kind of liked it. Not enough to see his follow up, A Million Ways to Die in the West when it first came out. But enough to make me watch A Million Ways to Die in the West when I was stuck on a plane for 12 hours.


Writer, director, lead actor, obvious narcissist, Seth McFarlane is Albert, a cowardly sheep farmer in the old west. When he talks his way out of a gun fight instead of shooting his way out, he is dumped by his girlfriend, Amanda Seyfried as Louise. Crying on the shoulder of his best friend, Edward (Giovanni Ribisi) and Edward’s fiancé Ruth (Sarah Silverman), Albert gives a monologue about the dangers of the time, justifying the movie’s title, so he can then move on to a pretty standard plot.

There’s a standard plot that involves Liam Neeson as outlaw and gunslinger Clinch, Charlize Theron as his reluctant wife and partner in crime Anna. There’s Neil Patrick Harris as the mustachioed romantic rival to Albert. And there’s a whole lot of obvious jokes, lazy references and bad CGI here and there. Will Anna give Albert the confidence he needs to realise he’s too good for Louise? Yes, yes she will. Will Albert and Anna fall in love. Yes, yes they will. Will the movie keep trying to convince us that it’s hilarious that Albert has named all of his sheep with regular human names? Yes, yes it will. Will those human names for sheep ever actually become hilarious? No, no they will not.

While there are plenty of good jokes, the problem with A Million Ways to Die in the West is the same as the problem with Family Guy. Too much focus on quantity, not nearly enough thought given to quality. And a lot of that comes down to context. Or, more specifically, lack of context. Just saying something outrageous, or silly, or crazy, or making a reference by itself does not a good joke make. A good joke needs a reason for that outrageousness, silliness, craziness or reference.

And this is perfectly exemplified by the Christopher Lloyd cameo (I would usually consider this a spoiler and not mention it here, but since this load was already blown in the trailer, there’s no way I’m ruining it for anyone). Late one night, Albert is walking through the deserted main street when he sees weird lights coming from behind a barn door. He opens the door to find Lloyd as Doc Brown, working on the Delorean time machine from Back to the Future Part III. Hilarious? Not quite. But it’s at least kind of funny, and really intriguing as you wonder where McFarlane is going to take the joke from there. Turns out, he takes it nowhere. Almost like his one sided conversation with the audience is, “Remember this thing from that other thing you love? Well, here it is in my movie. Reference! OK, moving on”.

I will say this though for A Million Ways to Die in the West, for all of its lazy joke writing, lazy plotting, stunt casting and heavy reliance on references for references’ sake, Seth MacFarlane managed to make a legit Western. The vast majority is shot on location in dusty deserts, recreated frontier streets and outdoors. That goes a long way to creating the feel of a real Western. And the score is spot on. A little too spot in how much it sounds like the main theme to Mel Brooks’ Blazing Saddles. But I’m OK with that. If you’re gonna steal, steal from the best.

Maybe I’m being too harsh, judging A Million Ways to Die in the West too formally in regards to quality film making. Because I don’t think McFarlane set out to make a quality film. I think he set out to make a movie. The kind of movie where you can switch off your brain, relax, and let it happen. I guess it kind of works on those terms, but it still needs more solid jokes to justify the long dry spells of shit ones.