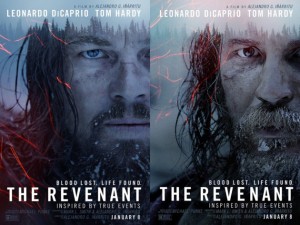 “As long as you can still grab a breath, you fight. You breathe… keep breathing.”

I’m a big fan of Leonardo DiCaprio and Tom Hardy, and will see pretty much anything either is in.   I may not think Birdman was necessarily the best movie of 2014, but I liked it and generally dig what director Alejandro Gonzalez Innuritu does.  And the stories around the making of his latest movie are nothing short of incredible.  But it’s those stories that made me a tad reluctant to see it.  I’m always wary of a movie where the most interesting thing about it seems to be its intense, or harrowed, or insane shooting process.  Shouldn’t the finished product be the thing that gets people talking?  Well, The Revenant did go through an intense, harrowing and insane shooting process, but the good news is, the end product is good enough to outshine that stuff and more than stand in its own.


After six long months in the snowy wilderness, a group of fur trackers a readying their haul and thinking about what they’ll all do with their share of the profits. But a raid by some Native Americans sees their furs stolen and over 30 of their party killed.  The dozen or so who survive only do so thanks to the quick thinking and local knowledge of their guide, Hugh Glass (DiCaprio).  But not everyone is thankful for, or believes in, his expertise.  Fellow trapper John Fitzgerald (Hardy) second guesses most of Glass’ decisions and is always looking for the quickest way home, rather than the safest or smartest.

Still running from the raiding Indians, the group stops to rest and Glass is attacked by a bear and all but killed.  Unable to speak or walk, the others strap him to a stretcher and try to forge on.  When it’s clear that hauling him through the elements is slowing them down too much, the group’s leader (Domhnhall Gleeson as Captain Andrew Henry) offers $100 bonuses to any men who will stay with Glass while the rest of them forge ahead.  The men who stay are Fitzgereld, Bridger (Will Poulter) and Glass’ teenaged, half Indian son, Hawk (Forest Goodluck).  But Fitzgerald has no intention of actually caring for Glass or hanging around.

The Revenant is a movie about survival and triumph over adversity.  But it’s not dealing with any inner, spiritual or metaphorical adversity.  This is literal, tactile, in your face, life threatening, physical adversity.  The elements and weather that these characters deal with seem like they could kill any of them at any minute.  And when the threat is manmade, Innuritu makes sure you see, feel and hear every single bullet and arrow fired.

While the location shooting makes for some really powerful visuals, they’re never enough to outshine DiCaprio and Hardy, who both deliver amazing performances.  This is DiCaprio’s first role since he was nominated for an Oscar for The Wolf of Wall Street.  While Hardy has had a massive 12 months with Mad Max: Fury Road and his dual roles as the Kray twins in Legend.  But The Revenant sees them both doing something so different.  Glass and Fitzgerals don’t seem like characters being played by actors.  They seem like real people, barely surviving any way they can.

The stories of the making of The Revenant were in the back of my head the whole time I watched and were a little distracting.  But I will say this about its intense, harrowing, insane making of, at least it’s all there on the screen.  If Innuritu needed to inflict these guys to that kind of torture to get these results, The Revenant makes it all look worth it.

Other Opinions Are Available. What did these people have to say about The Revenant?
The A.V Club
Sydney Morning Herald
Beating Ennui