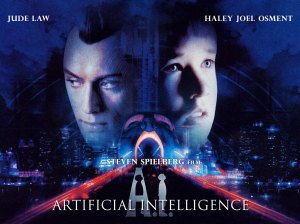 You’d be hard pressed to find two more notorious directors who gained their notoriety for more different reasons than Steven Spielberg and Stanley Kubrick. With Jaws, Spielberg made the world’s first blockbuster, and since then, he’s gone to be the most profitable director of all time. Along with Alfred Hitchcock, Spielberg might be the most recognisable name behind the camera in the history of cinema, a director who even the most casual movie viewer knows. Then you have Stanley Kubrick. While Spielberg makes ‘moves’, Kubrick made ‘films’. Highbrow stuff that only a tortured genius and perfectionist could make. He even made a trashy Steven King book into a cinephile classic.


When Kubrick died and it was announced that Spielberg would be talking over one of his passion projects, movie snobs were not happy. How could this crowd pleasing hack possibly understand the depths of a story that a genius like Kubrick found so fascinating?   Here’s the thing, I’m kind of on the fence with both directors. Spielberg is an undeniable genius who can make crowd pleasing, mass appeal stuff, that still has real heart. Movies like E.T, Schinderl’s List, Jaws and the first three Indiana Jones movies. But he’s also made painful syrup, like Catch Me If You Can, The Terminal and War Horse.

Kubrick was an undeniable genius who could do things through film that no one before or since could ever dream of. The only problem is, I rarely give a shit about those things he was doing. Sure, l love Dr. Strangelove and Full Metal Jacket, but the rest of his filmography just infuriates me. A Clockwork Orange and 2001: A Space Odyssey might be tied for the two most overrated movies of all time. And The Shining isn’t too far behind. I guess, all of that is just my long winded way of saying, I think I went into A.I: Artificial Intelligence with a tad more of a neutral, open minded, blasé outlook today, than any movie nerd back in 2001.

It’s sometime in the future, global warming has resulted in most major, coastal cities being flooded and destroyed. To combat the greedy, resource exploiting ways of mankind, strict laws have been placed on reproduction. So now, robots, or mechas, have replaced people in a whole lot of menial ways. When it’s decided that their function doesn’t have to be limited to the menial, David (Hayley Joel Osment) is built. A young boy mecha, capable of exhibiting love, he’s first given to a young couple (Francis O’Conner and Sam Roberts) whose own young son is currently cryogenically frozen, waiting for some sort of treatment or cure.

Initially, David’s real boy act does the job, helping the grieving parents cope with the loss of their real son. Only, he’s not lost, and eventually, they’re able to thaw him out. Some misunderstandings ensue and David is cast out, where he meets Gigolo Joe (Jude Law), another mecha who’s name says it all. Now David must go in search of his family and the meaning of his mecha life.

Spielberg gets a lot of flack for his reliance on sentimentality, and usually, I agree. But here, in A.I, he delivers some seriously dark, cynical shit. And sure, older actors like Law deliver, but Osment can take full credit for every single thing that is good about this movie. Once introduced, David is on screen for almost every second of the two plus hours that follow, and he’s amazing. He’s detached and distant, while amazingly empathic and a sympathetic at the same time. The Sixth Sense might be the reason that he became famous, and his performance has proven much more enduring that that movie’s cheap twist. If you watch A.I: Artificial Intelligence, his performance is another one that will stick with you for a while.