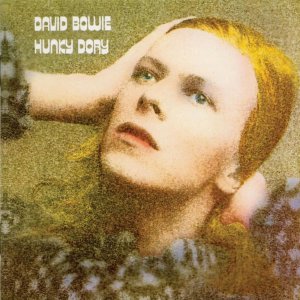 David Bowie is an undisputed legend. David Bowie is so influential, he’s influenced people who’ve gone on to be influential, like Iggy Pop. David Bowie has dozens of hit songs you’ve heard and know, whether you know that you’ve heard and know them or not. David Bowie is one of the few people who seems to have never had a dip in respect or admiration, staying popular and relevant for over four decades. Despite all of that, David Bowie is someone who I’ve never taken the time to listen to. When you decide to give a legend a go, and there’s over forty years worth of consistent output to choose from, where do you start? I started by letting Spotify choose for me, when it suggested I listen to Hunky Dory.


Kicking off with a stone cold classic like Changes is a promising start. I’ve heard it plenty of times over the years without ever seeking it out, and it never seems over played or overdone. It’s a stone cold classic because it’s impossible to not like. Great melodies, great sing a long chorus, great 70s pop song instrumentation. It really does tick all of the boxes.

Less a radio friendly earworm than Changes, and more like something from a rock musical, Oh! You Pretty Things (and later Fill Your Heart) is a piano based jaunt that in the verses seemed a little too on the nose and awkward. But when the chorus kicks in, it almost reaches Changes levels of catchy.

With Eight Line Poem, I started to realise something about Hunky Dory and David Bowie. He’s a lot more accessible than I ever imagined. I knew he’d made plenty of chart friendly hits over the years, but for some reason, I always assumed they were the exception to the rule. I always thought his albums would be a lot more about experimentation and weirdness, with the odd single thrown in there to keep is record label happy.

When Eight Line Poem is immediately followed by Life on Mars, I realise I’m close to halfway through Hunky Dory and it’s been nothing but piano based poppery. And I mean that in the best possible way. Every song is catchy, toe tappy and assured to make its way into your brain, whether you like it or not.

Dave puts away the piano, and almost everything else for Quicksand. Nothing but Bowie and an acoustic guitar for the first verse, it’s proof that there’s more to his songs than lush arrangements and instrumentation. Quicksand gets to those lush arrangements and instrumentation eventually, but the intro proves his song writing can stand on its own, without those flourishes.

In Song for Bob Dylan, Bowie goes beyond a lyrical tribute to the subject of the song’s title. The melody has a real Dylan-esque feel to it in the verses that could easily be sold as Dylan himself. The music ads a Bowie spin, but the heart in places is pure Dylan.

Thanks to Wes Anderson, Queen Bitch is a song I’m familiar with (albeit a cover in Portuguese). But it’s one of those songs I referred to in my intro. I’ve heard it plenty of times, I know it pretty well and I really like it, but I never knew it was a David Bowie song.