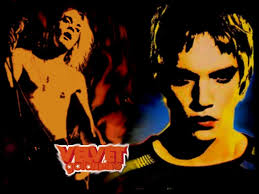 “He was elegance walking arm in arm with a lie.”

I’m generally not a big fan of anything ‘based’ on a true story, or something that’s a fictionalised story, heavily influenced by real events and real people.  I guess I think that if a true story is worth telling, it probably also deserves to be told truthfully.  Make the effort to research the real deal, make the effort to get the guts of what really happened.  ‘Based on’ or ‘influenced by’ just sounds like a lazy place to start to me.


I’m aware that could sound a little close mined.  I’m also aware that it’s highly likely that I’ve liked plenty of movies in this category before and just can’t think of them now.  And yes, Citizen Cane, arguably the greatest movie of all time is exactly that.  With Charles Foster Cane a thinly disguised version of William Randolph Hearst.  But I’m pretty sure that’s a rare exception to the rule.  So what happens when this approach to storytelling is combined with a subject matter that I’m pretty quick to dismiss, like 70s glam rock?  Velvet Goldmine happens, that’s what.

Jumping back and forth between the early 70s and early 80s, the 80s version of Arthur Stuart (Christian Bale) is a New York journalist, writing an article about the tenth anniversary of a hoax.  A hoax perpetrated in England by the 70s version of Brian Slade (Jonathan Rhys Meyers).  As a David Bowie-alike, Slade faked his own assassination while performing live on stage.  A show where the 70s Arthur happened to be in the audience.

Now, the time line gets even more fractured as Arthur’s interview subjects in the 80s send him back on various other flashbacks, tracing Slade’s life from the late 60s onwards.  Parallel to Slade’s career boom is that of Curt Wild (Ewan McGregor), a combination of Iggy Pop and Lou Reed.  And all of them are caught up in the sexual ambiguity / awakening of the androgynous pop stars of the time, making for a little social commentary about the times portrayed.

I mentioned Citizen Cane in my intro, and Velvet Goldmine pretty much steals that movie’s exact structure.  A journalist goes in search of the truth about some iconiclast, and gets seemingly random pieces of the puzzle from different people who knew the subject at different times.  Separately, their information is full of holes and almost worthless.  But when combined, they all fill each other’s holes.  And like the search for Rosebud in Cain, it’s the search for the answer that matters, not the answer itself.

Velvet Goldmine is a better than average movie.  The songs are great, and the performances from Bale, McGregor and Meyers are all more than strong.  Not to mention the great supporting turns from Eddie Izzard and Toni Collette.  But I still think it would have been better if it stuck to the true stories of the people who inspired it.  Not just because Bowie, Pop and Reed all obviously have stranger than fiction tales that would make an amazing movie.  But also because when Velvet Goldmine clearly strays from the path of truth and goes into obvious fiction, that’s where it’s at its weakest and least interesting.  If you want to tell the real, warts and all story, do the research, get the evidence and tell your story.