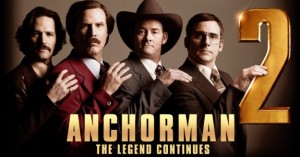 “Who the hell is Julius Caesar? You know I don’t follow the NBA!”


I watched the first Anchorman a decade ago when it first came out and its initial buzz was unavoidable. Its cast was great (the first sign of the massive comedy career Paul Rudd would go on to build), the story setup showed plenty of potential, and Ferrell is always going to bring more laughs than your average comedic lead. Only, it rarely made me laugh, and the potential fuelled premise quickly turned into a well and truly flogged dead horse.

Then, about three years ago, I realised the buzz around the original had only become louder and harder to avoid. So I figured I’d give it another shot. Maybe I wasn’t in the right frame of mind when I saw it the first time. Well, the re-viewing was even more of a chore and I came away more perplexed. So why waste my time on Anchorman 2: The Legend Continues, when it seems inevitable that I wouldn’t like it? Simple, its cast is great, the story setup showed plenty of potential and Ferrell is always going to bring more laughs than your average comedic lead.

It’s a decade after Ron Burgundy’s (Will Ferrell) triumph over the world of local San Diego news. Co-anchoring the weekend news with his wife Veronica Corningstone (Christina Applegate), things go pair shaped when she alone is offered the coveted nightly anchor spot. At his most egotistical, Ron leaves Veronica and is approached by Kench Allenby (Josh Lawson), a Rupert Murdoch style cable TV mogul who has just invented the 24 hours news channel. With all of the hours to fill, and no quality control to get in the way, Ron goes on a mission to get the band back together.

Along with Brian Fantana (Paul Rudd), Brick Tamland (Steve Carell) and Champ Kind (Dave Koechner), he blazes a trail of tabloid salaciousness, anger baiting and lowest common denominator reporting that never lets the truth or morals of journalism get in the way of a good story. Soon dominating the world of cable news, there’s some sort of act two setback that sees Ron blinded (I seriously can’t remember why or how that happens). Then you get your standard act three redemption as he learns his lesson, rebuilds his burnt bridges and perfectly mirrors the plot points of the first movie.

I will say this about Anchorman 2: The Legend Continues, Ferrell and McKay made an effort to actually say something with this movie. Like the legit criticism of corporate America snuck in underneath the jokes of The Other Guys, Anchorman 2 takes some serious swings at the current state of news, the people who make it and the people who watch it. And while I appreciate the effort, it’s just not enough.

In the end, I could see why this sequel was a box office success. It was a box office success for all of the same reasons I’ve never been able to get on board with the original. Too much reliance on silly costumes and wigs, and characters yelling wacky randomness. No real substance, no real reason to give a shit about any of it.