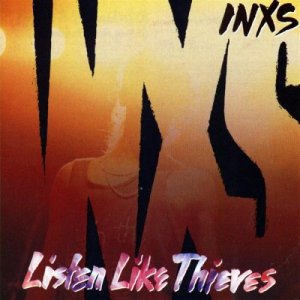 My experience with INXS at their height came in two different ways.  There was the string of huge singles being played non stop on the wireless.  And there was my older sister, who’s obsession with INXS meant I heard their music constantly seeping through my bedroom wall, and saw Dogs in Space way too young, way too many times.  And while it was probably a solid decade before it dawned on me what that movie was actually dealing with, it’s taken more than 30 years for me to voluntarily listen to my first INXS album, Listen Like Thieves.


The two opening tacks, What You Need and Listen Like Thieves are still on high radio rotation today.  And even though Kiss the Dirt (Falling Down the Mountain) and Shine Like it Does aren’t quite as prominent today, they’re still songs I recognised the second I heard their opening notes.  That’s a pretty impressive opening quartet of songs, to be so recognisable almost three decades after release.

After that impressive opening comes Good and Bad Times.  A song I don’t think I’ve ever heard before, but it sounds just as a much an integral part of this album as the songs that precede it.

With it’s quicker than expected tempo and simple melody, Biting Bullets is much more in the post punk, 80s pop mould of what I expect from the era. Distorted guitars always present, but taking a back seat to the crisp (electric?) drums and dominant synths.

This Time is another commercial radio staple that makes me realise I am much more familiar with Listen Like Thieves as an album than I ever would have expected.  Your average long player has maybe three singles and eight or nine album tracks that remain deep cuts.  That ratio is pretty much flipped on this record.


Then comes Three Sisters and Same Direction, the kind of 80s synth and sax experimentation and indulgence I could really do without.  But I guess they can’t all be winners.

After thinking they may have made Listen Like Thieves top heavy with all the best stuff at the beginning, album closer Red Red Sun is a really strong closer that brings it home nicely.

Like Midnight Oil’s 10 to 1, Listen Like Thieves is produced and polished to an almost blinding degree.  But while I found that took away any heart and soul the Oils may have ad, I don’t get that feeling with INXS.  Maybe Michael Hutchence was just more charismatic than Peter Garrett.  Maybe the Farris brothers wrote better music that isn’t as tied to the period.  Whatever it is, this sound is much less dated than the Midnight Oil album from just three years earlier.