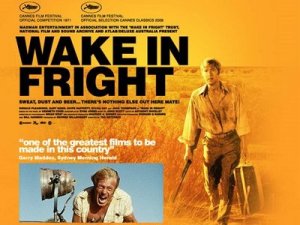 40 years ago, a gritty Australian horror movie made it’s premiere to some acclaim at Cannes.  Unable to turn that festival success into box office receipts, it all but disappeared for a few decades.  After building a cult following and becoming almost an urban legend through its elusiveness, it was championed by people like Quenin Tarantino.  Then, someone found an old film print labeled “For Destruction” in a Pittsburgh warehouse.  Since then, Wake in Fright has found new life as a neo Aussie classic.


Finding horror in the vast, open deserts of the Australian outback, Wake in Fright uses the fact that you can see for miles in every direction, to highlight just how little there is to actually see.

After leaving his tiny town of one pub and one school house, school teacher John Grant (Gary Bond) travels to Bundanyabba on his way home to Sydney for the Christmas break.  At first, the Yabba, as it’s known by locals, seems like a step up from his teaching post.  Paved streets, an almost bustling town centre, a four figure population.  But it doesn’t take long for Grant to realise there is more to the Yabba than may appear.

Everyone he meets seems to think he’s missing out by only planning to stay in the town for one night, and their strange brand of hostile hospitality is almost immediately apparent.  Every inhabitant of the Yabba aggressively forces their way of life on Grant the second they come in contact with him.  A result of their environment, the outback has made them harsh and uncompromising in order to survive.

Once in the Yabba, everyone Grant meets has their own tragic story of accepting life in the Yabba and the brutal land around it.  The local policeman, played by the quintessential Australian of the time, Chips Rafferty, succinctly sums up the population and their outback environment in just a few words, “We do get a few suicides. They reckon it’s the heat”.

The fact that Wake in Fright was directed by a non-Australian is a major contributor to its portrayal of the outback and desert. It’s very possible that being from another country, Ted Kotcheff would have been more sensitive to the real life versions of a town like the Yabba and its inhabitants than an Australian who may have been a little more desensitised.

At its core, Wake in Fright is, as described by critic Rex Reed, “The uncompromising story of a civilized schoolteacher trapped for five days in a remote, nightmarish mining town”, showing, “a primal, terrifying side of Australia”.  While the people can claim most of the credit for this primal, terrifying nightmare of Australia, Kotcheff never lets the viewer forget that they are primarily a product of their environment.

While sympathy is never gained for the townspeople, Kotcheff’s portrayal of the outback does give them a tragic context.  Almost as if to say that with such a harsh and unrelenting world around them, how could they not become the animals they are?