In a nutshell, Bored & Dangerous says: “It’s energetic, lively and fun, even when it makes you think about to its more serious themes and issues.”

“In life, there are times to be quiet, to shut the fuck up. This is one of those times.”

When Spike Lee released his latest, Chi-Raq, there were three main reactions.  Some people absolutely loved it, some people absolutely hated it, most people didn’t even see it.  Which really sucks, because I’m one of the people who really loved it.  And while it may not have been the best movie of 2015, it was by far the most vibrant and energetic movie of 2015.  I also think it was totally, 100% the exact movie Lee wanted to make.  Watching Chi-Raq made me think a lot about Lee’s widely revered masterpiece, Do the Right Thing.  Now, I just watched an earlier Spike Lee joint that I think rounds out stylistic trilogy with those two, School Daze.


At Mission College in the 80s, there’s unrest and dissatisfaction.  Despite being an all black college, there’s still plenty of racial tension.  Dap (Laurence Fishburne) leads a group of dark skinned African Americans who spend their days protesting for freedom and the abolishment of Apartheid in South Africa.  On the other end of the spectrum are the light skinned students lead by Julian (Giencarlo Esposito), whose clique is more concerned with the fraternity and sorority side of college life.With the derogatory nicknames flying from both sides, the dark “Jigaboos” clash with the light “Wannabes” from one side of the Mission campus to the other.  In the middle is Half Pint (Lee), loyal to Dap through blood as cousins, loyal to Julian through his desire to join a frat.  It’s a coming of age as all of these students struggle with becoming adults, and with their own evolving attitudes about what it means to be black in (then) modern America.

Theatrical, over the top and never afraid to go big, School Daze feels like a practice run before tackling the even more ambitious Do the Right Thing.  I’d say the latter was more ambitious, which it is in its technical film making and the social issues it tackles, but the former is impressively ambitious in different ways.

A semi musical, several scenes turn into full blown song and dance, and Lee is never scared to embrace the more hammy aspects that come with it.  A scene will go from an exterior shot in a real life street, then turn into an obvious sound stage and set when the characters move inside for the big number.  The word “stagey” is often used as a criticism when plays are adapted to the big screen.  With School Daze, Lee went directly to the big screen, but brought a staginess to it anyway, that makes it so energetic, lively and fun, even when it makes you think about to its more serious themes and issues. 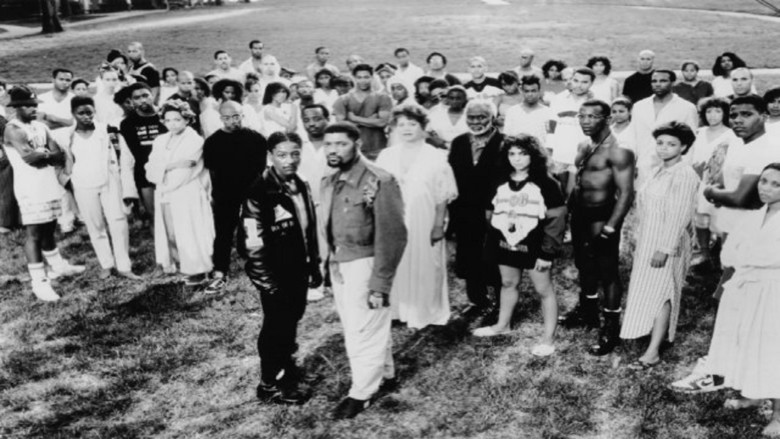 Spike Lee has had experimental, arthouse moments, he’s had mainstream, blockbuster moments.  But I think I like his most Spike Lee moments.  And to me, those are the moments of big, broad, theatrical pomp, tackling dark, serious subjects that obviously keep him up at night.  Moments that fill movies like Chi-Raq, Do the Right Thing and School Daze.

Other Opinions Are Available.  What did these people have to say about School Daze?
The New York Times
Slant Magazine
Funk n Stuff