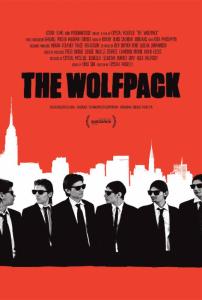 When certain stories make their way to the screen, some just have to be documentaries. Sure, the box office and exposure of a great documentary is rarely as big as those for even the dodgiest of narrative movies, but there are times when the reality of the documentary format is the only way a story can be told. Because some stories are too implausible and too hard to suspend enough disbelief over, unless you can see it really happening.


The Wolfpack is the kind of story that could easily be dismissed as comically far fetched, or cloyingly melodramatic if it was performed by actors working from a script. But when it’s a documentary camera following these people through their real lives, this stranger than fiction story becomes tragically real, with the odd hint of inspiringly uplifting.

One day, film maker Crystal Mosella was walking down a New York street when she stumbled across six brothers who inexplicably caught her attention. There was something compelling about the boys, and she struck up a conversation. It turns out that the brothers Angulo, ranging from pre teen to almost 20, had spent almost their entire lives confined to their New York apartment. Their father had the only key to the front door, and even their mother only left in emergencies.

The only link to the outside world for these dudes had been the thousands of movies they watched over and over again. But more than just watching movies, they also remake their favourite scenes. Using charmingly homemade costumes and props, they recreate pivotal moments from Reservoir Dogs, Pulp Fiction, The Dark Knight and more. It was only a year or so before Mosella met them, that the Angulo brothers had begun defying their father’s rules and leaving their apartment.

Mosella treads a very fine line with The Wolfpack that always manages to stay just on the side of concern and affection, but could have easily fallen into exploitation and voyeurism. She knows her subjects are awkward, not the most socially well adjusted and innocently fascinating. But also feels like this exposure is a good thing for the Angulos, like it might help make up for lost time as they explore and experience more and more of the outside world. 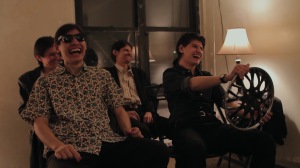 The Wolfpack also makes no apologies for their parents. A drunk, lazy, possibly abusive father who barley speaks enough English to even attempt to justify his strange child rearing methods. A mother who at best seems complacent about her husband’s actions. Their sons are obviously victims and their story is obviously tragic, but The Wolfpack has just enough hope to make you think that despite some terrible, terrible parenting, it could all work out in the end for these boys.

The Wolfpack
Directed By – Crystal Moselle

Other Opinions Are Available. What did these people have to say about The Wolfpack?
The Guardian
The Sydney Morning Herald
A Shared Madness