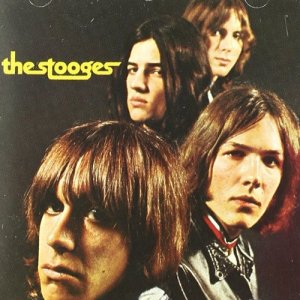 Iggy Pop, that walking piece of beef jerky with a shirt allergy, has been punk rock’s Godfather for so long, he’s now an old, old man, looked up to by bands who themselves have been around for decades. So long, it’s sometimes hard to remember he was a once young man. But almost half a century ago, he certainly was that, fronting a band that would go on to be one of the most iconic in punk and music history. That band was the Stooges, and in 1969, the released a self titled debut.


A surprisingly funky start with 1969, the Detroit origins of this band are clearly evident. Iggy’s voice is surprisingly restrained, over the top of the relentlessly driving drums of Scott Asheton and wahed to the limit guitar of Ron Asheton. But when the blown out guitar and feedback of I Wanna Be Your Dog ring out, the enduring punk rock legacy seems totally justified. It’s still slower and you can hear Iggy holding back, but the attitude is most definitely there.

When I first fired up The Stooges on the ol’ Spotify, I was surprised to see a 10 minute song on the track listing. And it’s not even the last song where I would assume it’s a free from jam, or has a few minutes of silence before a secret track. Here it is, We Will Fall, ten minutes and eighteen seconds plopped right there at track three. An ominous chant and haunting organ that I can’t imagine ever listing to it again by choice.

But it’s quickly forgotten when No Fun kicks in. It’s more in the style of The Stooges I know a little better from Raw Power. It’s still nowhere near as intense as where this band would head in just a few years from this point, but you can hear that intensity growing.

After the immense We Will Fall and five minute No Fun, it’s a race to the finish with the final five songs (of eight) representing about a third of The Stooges’ running time. Real Cool Time is rambling and a little aimless, but that never stops it from being compelling, immediate listening.

File Ann under the same ‘pointless’ moniker as We Will Fall. The upside is, you only have to sit through three minutes of wasted time here. The other upside is, it’s followed by Not Right, a really cool, down and dirty slam song about some mole who done Iggy wrong.

The Stooges is a good album, but far from great. It’s clear that this version of the band would never go onto become rock and roll legends if they were content with their output on this album. It’s also clear that there were signs of the band they would become. And that a little hard work, as well as a guiding hand from David Bowie, would soon make them the band who more than earned their legendary status in rock and roll.