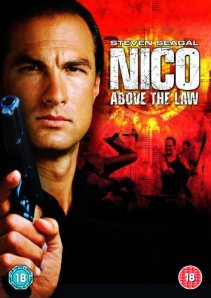 Wow, somehow I’ve lasted this long, over 200 posts, without writing about this cinematic genius.  How have I written about several Billy Wilder movies, half a dozen Cary Grant performances, countless Oscar winning writers, directors and actors, yet this man (unjustly ignored by the Academy in all categories) has gone completely ignored until now?  Even now as I start to write, I know I could never do him justice.  For he is Steven Segal, and the first time he deigned to blow the world’s collective mind was Nico: Above the Law.


As Nico, Segal narrates the opening minutes and gives the audience a quick rundown on who he is, where he’s been and where he is, just to make sure we’re up to speed.  It turns out, Nico was recruited by the CIA when he was 20 because he was good at karate.  Yep, it makes sense that being able chop boards of wood in half with your bare hands is how the Central INTELLIGENCE Agency finds the best and brightest.

He sees some shit go down, becomes disillusioned and quits the CIA, only to emerge years later as a Chicago cop with a partner played by Pam Grier (career headed down) and a wife played by Sharon Stone (career headed up).

There’s a story about some old bullshit, but it’s not important.  When I was 12 or 13 and thought these kinds of movies were the best, I could have recited every intricate plot point of something like this, or Lethal Weapon, or Tango and Cash or Death Warrant.  But when I watch them now, I never pay any attention to the story, because it just doesn’t matter.  I don’t do this consciously, my brain just decides there’s no point wasting energy on it.  All of a sudden the end credits are rolling and realise I’ve retained nothing.

Here’s an indication of the kind of movie you’re dealing with in Nico: Above the Law.  Not once, but twice within the movie, characters call Segal’s character by his real name ‘Steve’, instead of ‘Nico’.  To me, there are three ways in which that happened…
a)    The film makers are so half assed, they didn’t notice it on set or in the editing room.
b)    They did notice it in editing, but the movie was made so fast and cheap, it was the only take they had both times and just had to live with it.
c)    They did notice it in editing, had other takes to choose from, but no one involved could be assed putting in the effort.  Because they realised they were only making Nico: Above the Law.  So who gives a shit?

It’s got nothing on the five minute soliloquy about environmental preservation delivered at the end of On Deadly Ground, but it’s great to see Segal’s pretentions emerged fully formed in his debut when Nico: Above the Law finishes with his half whispered, lobotomised voiceover declaring, “Whenever you have a group of individuals who are beyond any investigation, who can manipulate the press, judges, members of our congress, you’re always gonna have within our government, those who are above the law”.