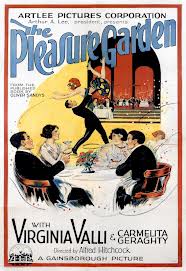 As far as directors with household names go, the top two would have to be Spielberg and Hitchcock.  And while Spielberg gets to remind the world he exists every year or two with more massive budget blockbusters, Hitchcock’s enduring notoriety hangs in there, despite the fact that he’s been dead for more than 30 years and hasn’t made a movie in almost 40.  In fact, his name is so enduring and has been around cinema for so long, the first time it appeared with a director’s credit, it was on a silent film, The Pleasure Garden.


The story of two young chorus girls, Patsy (Virginia Valli) who is wide eyed and Jill (Carmelita Geraghty) who is wide legged.  They both work at The Pleasure Garden, a theatre in London, and live together in Patsy’s small studio flat. Jill’s fiancé, Hugh (Joh Stuart) stops by on his way to a two year stint on an overseas plantation where he’ll save the money to finally marry Jill.  With Hugh is his boss, Levet (Miles Mander), a possible love interest for Patsy.

While Hitchcock may have become a name synonymous with suspense, horror, intrigue and twist endings, The Pleasure Garden has none of these things.  If this story was any more simple, straight forward and predictable, it would be a Kathrine Hiegl rom com.

There’s acting, and the then there’s silent film ACTING!  It seems like film makers back then were worried that the title cards weren’t enough to get the story across.  They wanted to make sure each massive eyebrow raise, cramp inducing scowl, frustrated fist shake and whiplash causing eyelash flutter did all it could to propel the story.

I’d like to say there are signs of the director Hitchcock would become, but there really is no real directorial flare.  Then again, being made in 1925, when feature length films were still in their infancy, the fact that he was able to tell a coherent story at all is probably amazing enough.  And a sign that Hitchcock was someone who would go on to much bigger, and much, much better things.The Pleasure Garden
Directed By – Alfred Hitchcock
Written By – Eliot Standard