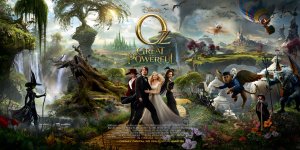 Sam Raimi began the new millennium in real style.  The Bryan Singer X-Men movies were solid, but Raimi’s 2002 Spiderman is really responsible for the invasion of mega budget superhero franchises we’ve had since then.  He followed it up with a great first sequel and a not so great (but not as bad as people say) second sequel.  A couple of years of letting the disappointment of Spiderman 3 die down and he returned to his roots with a low budget horror movie called Drag Me to Hell that you probably never saw.  Meaning this year’s Oz the Great and Powerful was his return to a huge budget, big name stars and a property we’re all familiar with.  And I think he nailed it.


James Franco is Oscar “Oz” Diggs, a turn of the 20th century travelling magician and grifter.  When he works one con too many, he escapes his vengeful victims in a hot air balloon, flying right into tornado.  Until this point, everything is in square screened black and white.  As Franco takes in his new surroundings, the aspect ratio widens and the spectrum exploding colours fade in to show the land of Oz in all its glory.

Franco quickly meets a witch played by Mila Kunis, a winged monkey voiced by Zach Braff, another witch played Rachel Weisz’s Evenora. an anthropomorphised china doll named appropriately (or is that lazily), China Girl and yet another witch, this one played by Michelle Williams.  There’s a prophecy to live up to, a mountain of gold at stake, a war to be won and innocent lives to save.  And I’ll be buggered if Franco’s Oscar Diggs doesn’t also learn a few valuable lessons along the way.  This thing really does move at breakneck speed and never really stops for a breather.

One thing struck me half way through Oz.  If everything in The Wizard of Oz was just Dorothy’s dream, how and why does the world exist outside of her head?  Do her dreams come with back story to fill in what happened before she got there?  I’ve never read the source books by L. Frank Baum, and let’s be honest, I probably never will.  So maybe he explains this, but to me, that realisation sort of took the wind out of the movie’s sails a little.  But only a little.

Heavy reliance on CGI gets a lot of criticism, and generally it’s deserved, but when used well, like it is in Oz the Great and Powerful, it can be just another tool at a director’s disposal to tell their story in the best, most effective way.  The little China Girl is a great example.  She’s more realistic and more effective as a character than anything crapped out in Avatar.  The CGI is also offset by the old fashioned, mechanical nature of the gadgets the Diggs character and his band of Tinkers build to use in their fight against the evil sister witches.  Even though computers were used to create pretty much everything we see on the screen, the fact that they’re depicting Edison style, early 20th century inventions gives these super modern effects a certain old fashioned charm.

Oz the Great and Powerful will never have the enduring legacy or classic status of 1939’s The Wizard of Oz, but if we had to get a 21st century, CGI heavy version of this world, I’m glad they gave the reigns to Sam Raimi.  And I’m glad he gave the lead role to James Franco who jumps in head first and really delivers on the charisma needed to make Oscar Diggs the conman and reluctant hero this movie needed.