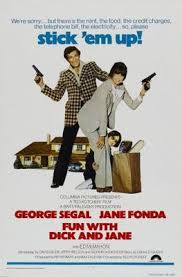 “Interesting that the only two jobs you think I am qualified for are a secretary and a prostitute.”

Ted Kotcheff… Director of insane Australian psychological horror Wake in Fright. George Segal… Star of middeling 90s / early new millennium sitcom Just Shoot Me and amazingly hilarious, tragically under seen 70s comedy Where’s Poppa?. Jane Fonda… Sexplotation hotty who graduated into overly self important prestige pomp. What do these three people have in common? They all believe the moon landing was faked*. They also all worked together on Fun With Dick and Jane.


Dick (Segal) works for a high end aerospace company, until he’s fired. When he gets home to his upper middle class home, his wife, Jane (Fonda) is directing an army of builders and gardeners as they have a new pool and elaborate landscaping installed. She takes the news of Dick’s sacking well, at first. But it’s more to do with their own obliviousness than it is compassion. The two continue living their lavish lifestyle until all their money is gone. END_OF_DOCUMENT_TOKEN_TO_BE_REPLACED
Loading Comments...