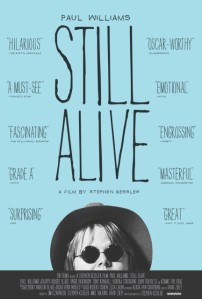 You might not have ever heard of Paul Williams.  Even if you saw a photo of him, that might not spark any recognition either.  But you have heard his songs.  And he has a lot of really great songs.  In the 70s, his songs were everywhere, turned into hits by himself and every other chart topping artist or band at the time.  He also became a regular talk show guest on American TV, appearing on Johnny Carson’s  Tonight Show more than fifty times.  Williams even acted in a few movies, including where I know him from best, as Little Enis in the Smokey and the Bandit franchise.  Then, he disappeared from the limelight.


In the late 60s and for all of the 70s, he pumped out countless hits for himself and others.  Songs like “We’ve Only Just Begun” by The Carpenters, “An Old Fashioned Love Song” by Three Dog Night, the theme song to “The Love Boat” and “The Rainbow Connection” (the biggest hit by a frog with a hand up its freckle who wasn’t Edith Piaf).  But like all people who were successful in the 70s, Williams did a whole shit tonne of cocaine, bottomed out and found sobriety while losing all notoriety.

In the opening minutes of Paul Williams Still Alive, director Steven Kessler tells his own story about how much Williams meant to him as a child.  Williams was short, fat, kind of funny looking.  The fact that he could still be a star on TV and hang out with the beautiful people of show biz made Kessler feel better about himself as an awkward child.  Obviously, with any movie, especially a documentary, you want the film maker to be invested and passionate about their subject matter.  But in Paul Williams Still Alive, Kessler’s own personal history with his subject might be its biggest weakness.

Too often, Kessler resorts to making the film about his relationship with Williams.  Which I’m sure is fine, if you’re audience is interested in Kessler.  Me personally, I don’t really care too much about how the life of the director of National Lampoon’s Vegas Vacation changes when he gets to spend a couple of years hanging out with his childhood idol.  I care about the idol, what he did in the past to become one, what has happened to him since as a result of that idolatry, how he’s adapted to life after all that attention goes away.

Like anyone who used to have huge main stream success, Williams is still a massive draw somewhere wacky.  In his case, the Philippines.  When Kessler follows Williams there for a tour, it’s one of the most interesting present day sequences in Paul Williams Still Alive.  It also highlights one of the least successful aspects of the film as a whole.  Before leaving, we see some really shaky footage shot with Williams on a golf course.  Kessler’s voiceover explains he thought he should learn how to use the camera and sound equipment since he would have to shoot it all himself once they’re in the Philippines.  The only problem, the movie already looked pretty ugly, poorly shot and visually boring up until this point.   Assuming Kessler had been his own one man crew all along was the only reason I cut it any slack for its technical short comings.

Paul Williams Still Alive has its interesting sequences.  Anything involving archival footage from his 70s peak is great.  Everything about Steven Kessler’s relationship with Williams while they shot the doc, not so great.  At least I’ll always have Smokey and the Bandit 2, where Williams flies a World War II era fighter plane and drops a load of horse crap on someone.  You can never take that away from me, Steven Kessler.