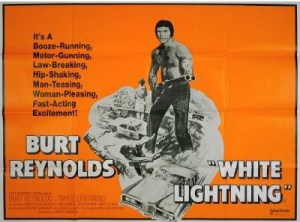 When I was a kid, between the ages of about 6 and 12, I don’t know if there were any movies I saw more times than the first two Smokey and the Bandits.  I thought Burt Reynolds was the coolest dude in the world, and his Trans-Am was the coolest car in the world.  Not seen as often, but still in pretty regular rotation in my childhood lounge room were the first two Reynolds filled  Cannonball Run movies (also popular in my house was the Reynolds / Dolly Parton team up, The Best Little Whore House in Texas.  But that should probably be talked about in therapy, not here).


Those Reynolds movies of the 70s and early 80s were just too simple to cock up.  Give him a fast car and let him revel in all his hilarious, charismatic, egotistical glory.  Which is why, I was so pumped to find out that the Reynolds car chase phenomenon started before Smokey and the Bandit.  It started three years earlier, with White Lightning.

As Gator McKlusky, Reynolds uses his skills behind the wheel as a moon shine runner in Louisiana.  But when his straight laced, college student younger brother is killed by local moonshiners, Gator decides to take the organisation down, including local the Sherriff (Ned Beatty).

There’s a funny moment towards the end when White Lightning attempts to dabble in some topical themes when it’s revealed Gator’s little brother was a protesting some sort of generic conservative action of the era.  But it comes off as more cluelessly funny than in any way insightfully scathing or intelligent.  There’s an even weirder, more jarring and clueless tone at the very end that made the whole movie seem different in those closing seconds.

The plot is paper thin, the characters are less than one dimensional (if that’s possible), and most of the performances are amateur at best.  Which is exactly what you need in a movie like White Lightning.  The last thing you want is a story that makes you think, or compelling characters played by competent actors.  I wouldn’t want to risk any of that distracting me from the amazingness that is Burt Reynolds, driving a car, stealing hearts and dropping his signature laugh every 10 to 15 minutes.

After White Lightning, director Joseph Sargent didn’t have the most illustrious career.  There are a lot of tele movies, and what is regarded as possibly the worst sequel in the history of sequels, Jaws: The Revenge.  But he did make one of the all time great 70s B-movies, The Taking of Pelham One Two Three.  As cheap and nasty as White Lightning might be, there’s a definite film making skill and visual style to it.  Combined with the gritty cool of Pelham just one year later, it really makes me wish Sargent had been given more of a chance.   There’s a sweaty, dirty edge to both movies that makes them more effective than their sensationalist, low rent story lines would suggest.

I grew up loving See No Evil, Hear No Evil.  I know it hasn’t aged well and that a lot of people see it as the worst of the team ups between its two main actors.  And I know it’s probably fuelled by pure nostalgia these days, but what can I say, I still find Gene Wilder and Richard Pryor really funny in that movie.  Funny enough that’s it’s totally bizarre that I never got around to seeing their other two major teams ups, Stir Crazy and Silver Streak… Until now.  Because now, I have seen Silver Streak and I’m not sure I want to take my chances with Stir Crazy.


Gene Wilder plays George Caldwell, a mild mannered book editor, boarding the Silver Streak, a long haul train to Chicago.  On board, he meets Bob Sweet, a vitamin salesman played by Ned Beatty.  This meeting leads to one of the very few funny parts of Silver Streak when Beatty describes his methods for using train rides to score a bit of transient tail.  It turns out his theories aren’t so out there, because soon enough, Wilder has hooked up with train trollop Hilly Burns (Jill Clayburgh).

They hook up, or at least, they begin to hook up, but are rudely interrupted when Wilder sees a dead body hanging outside the train’s window.  This sets off a story of Wilder becoming more and more mixed up in a world of intrigue, suspense and mystery. I assume.  I got bored a lot and found myself zoning out for long periods of time struggling to give the smallest of shits about what was going on.  Silver Streak gets a much needed shot in the arm about halfway through when Richard Pryor pops up as pretty crook Grover T Muldoon.  Black face sequence aside, the chemistry of Wilder and Pryor is almost enough to make it worth sitting through the first half.  Almost.

Until the appearance of Pryor, I genuinely wasn’t sure if Silver Streak was supposed to be a comedy or an action thriller.  It’s not that I thought the jokes weren’t funny, the problem was I struggled to even recognise attempts at jokes.  Maybe it was just working on a subtle, dry level I just don’t get, but I wasn’t 100% sure it was even trying to be a comedy until I googled it and saw a poster that described Silver Streak as, “The most hilarious suspense ride of your life”.  Whoever wrote that had one sad life.  I say “had” because I assume that line’s author is dead now, having died of shame after lying to the movie going public like that.

In case I haven’t been clear, I did not like Silver Streak.  Wilder and Pryor both get a few funny bits here and there, but not nearly enough to fill a feature length film that’s supposedly “The most hilarious suspense ride of your life”.  I’m struggling, do I risk it and give Stir Crazy a go, or just play it safe and watch See No Evil, Hear No Evil again?