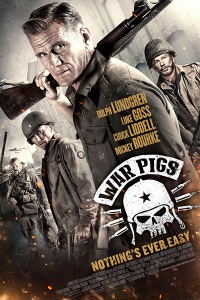 A ragtag group of misfits being thrown together to take on a mission no one else would attempt, and no one else thinks this ragtag group of misfits has a chance in hell of  accomplishing.  This basis for a movie is nothing new.  Even restricting it to movies set during WWII there countless examples.  Examples like Inglorious Basterds, The Monuments Men, The Dirty Dozen and Kelly’s Heroes.  I guess it gets used so often because audiences like it, I know I do…  When it’s done well.  But when it’s not done well, you get lazy cliché fests, like War Pigs.


After following bad orders based on bad intel, Capt. Jack Wosick (Luke Gross) loses his entire platoon and is forced to take the blame.   Only, Major AJ Redding (Mickey Rourke) knows that Wosick was just a pasty, and is a good soldier.  So, he gives Wosick a new assignment.  There’s a group of enlisted men known as the War Pigs.  They’re a little on the ragtag, misfit side of things and they have managed to scare off more than one commanding officer.  Along with French commando Captain Hans Picault (Dolph Lungren), Wosick is charged with whipping the War Pigs into shape. END_OF_DOCUMENT_TOKEN_TO_BE_REPLACED 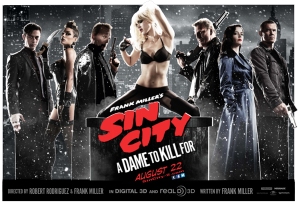 “Death is just like life in Sin City. It always wins.”

Nine years ago, director Robert Rodriguez did what Robert Rodriguez does best.  He took a super schlocky, super B grade, super exploitationy all story, and he turned into ground breaking, rule breaking cool that didn’t just ignore its lack of substance, it embraced it. That movie was Sin City, based on the comic book series of the same name by Frank Miller.  Using the comics as story boards, Rodriguez even gave Miller a co-director credit.


Nine years is a long time between drinks.  Long enough for the shine of that ground breaking, rule breaking cool to have well and truly worn off.  Which is why all those same tricks seem kind of boring in Sin City: A Dame to a Kill For. END_OF_DOCUMENT_TOKEN_TO_BE_REPLACED

“If you want to talk, you always have the guys at the diner. You don’t need a girl if you wanna talk”.

It’s always impressive when someone puts together a large ensemble of A-list stars, before any of them reached the A-list. Richard Linklater did it in the 90s with Dazed and Confused, filled with soon to be big names like Ben Affleck, Milla Jovovich, Joey Lauren Adams, Parker Posey and Matthew McConaughey. In 1983, Francis Ford Coppola did it with The Outsiders, starting a pre-fame Matt Dillon, Ralph Macchio, Patrick Swayze, Rob Lowe, Emilio Esteves and Tom Cruise. And the very next year, fist time director Barry Levinson managed to put together a similarly impressive cast of then nobodies, with Diner.


Semi-autobiographical about his own time as a young adult in Baltimore, Diner opens on Christmas night in 1959. Boogie (Mickey Rourke), Fen (Kevin Bacon), Shrevie (Daniel Stern) and Modell (Paul Reiser) are all aimlessly shooting the shit at a diner, getting ready for the upcoming weeding of their friend, Eddie (Steve Guttenberg). When they finally call it a night in the early hours of the morning, they’re just in time to pick up the last member of their group from the train station, Billy (Tim Daly). END_OF_DOCUMENT_TOKEN_TO_BE_REPLACED
Loading Comments...