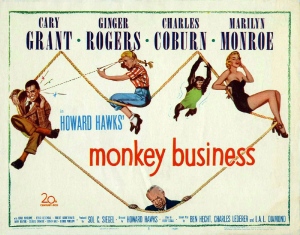 When I wrote about Arsenic and Old Lace, I was really surprised by Cary Grant’s commitment to silly, and said “he’s a mugging, broad, slap sticky goofball, and I loved every second of it”.  Well, it turns out that his Arsenic performance is late-career-Bill-Murray-dead-pan, compared to the goofy mad cappery that is Monkey Business.


Not to be confused with the 1931 Marx Brothers movie of the same name, mainly because it’s nowhere near as funny as the brothers Marx, this version of Monkey Business centres around Grant as Barnaby Fulton, an absent minded professor in search of a youth serum.  His concoction doesn’t work, but in a piece of movie convenience, one of his test monkeys does manage to make a working serum that Grant inadvertently drinks.

Feeling ten years younger, he embarks on a day of cheap thrills and chasing tail.  Not just any tail, Marilyn Monroe tail.  The next day, recovered and back to his older self, he’s determined to give the serum another go for further study.  This time, his wife, Ginger Rogers’ Edwina, takes the serum so Grant can stay sober and study the effects.  It turns out, the more people drink, the younger they feel and much hilarity ensues.

Watching Grant and Rogers fully commit to playing bratty versions of themselves from little kids to young adults is pretty fun.  The huge extremes might not be the most subtle, but this is a movie in which a monkey invents a youth serum, so subtly isn’t really called for.

The biggest and best surprise in Monkey Business is Marilyn Monroe.  While only five years into her filmography, it seems that this is one of her first substantial roles.  Watching the movie, it also seems like Monkey Business happened before she discovered the soft spoken, pouty lipped, bimbo schtick that ended up being her stock in trade.  Here, she sells the sexiness without resorting to that annoying, hacky stuff that I’ve never seen the appeal in.

Watching Monkey Business also made me ask the question, why are there ever unfunny comedies?  Because you know what, there’s no scene so unfunny that it can’t be fixed by getting a monkey in there.  Especially a monkey dressed in people clothes.  I’m gonna go out on a limb and say even something as horribly boring and unfunny as Weekend at Bernie’s II, Airplane II, or even Blues Brothers 2000, would have been hysterical if their monkey quotient was increased by just one.

After always associating Grant with movies like His Girl Friday and Bringing Up Baby where he plays the sane one in the midst of all the craziness, I’m really enjoying this recent, and inadvertent, festival of Cary Grant the clown.  His proper diction, handsome looks and imposing build just make the bumbling that much funnier.