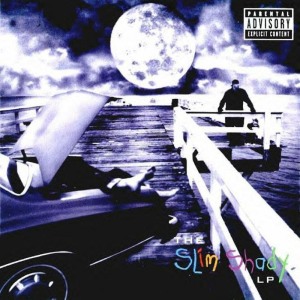 I remember Eminem breaking though in a big way with My Name Is and pretty much immediately writing the song and its performer off as a novelty. He was white and had a silly, nasal, jokey delivery. All that, with the wacky lyrics and video for My Name Is, and it’s asking a lot for him to be taken seriously, no matter how clever and quick fire the lyrics are. Now, almost 20 years later, he’s an undisputed hip hop legend, and I have no problem with that. But I realised, I have only ever heard the hit singles and still kind of off handedly consider Eminem novelty. But I know there’s a lot more to Marshall Mathers, which I’m hoping to discover with his breakthrough, The Slim Shady LP.


My Name Is sounds just as gimmicky and tossed off as it always has. The wordplay is impressive and there’s a certain wit to his rhymes, when they’re not being undermined by the easiest of dirty jokes and entendres. And the constant references to mentor Dr Dre sound a little needy. Like Eminem is determined to make sure we all know he’s friends with the N.W.A legend. END_OF_DOCUMENT_TOKEN_TO_BE_REPLACED
Loading Comments...