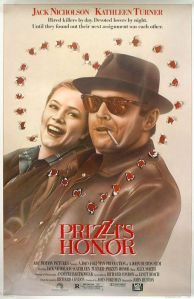 “Charley, you swore an oath of blood, my blood and yours, that you would always put the family before anything else in your life. We are calling on you to keep that sacred oath.”

John Huston is a legendary director who I don’t know nearly enough about and whose movies I haven’t seen nearly enough of. Jack Nicholson is an actor who I generally enjoy, but I would never see him as a reason to see a movie. Kathleen Turner and Angelica Huston are two broads who I don’t really get. But the combination of all of these random people was intriguing enough for me to watch Prizzi’s Honor without knowing a single thing about its story.


Charlie Partanna (Nicholson) is a hitman for the New York Prizzi crime family. At a mob wedding, he sees Irene Walker (Turner) and is immediately obsessed. Tracking her down in LA, Irene initially claims to be some sort of financial adviser. But Charlie soon learns that like him, Irene is also a killer for hire. This only makes his interest in her stronger, and soon, the two have eloped and married. END_OF_DOCUMENT_TOKEN_TO_BE_REPLACED
Loading Comments...