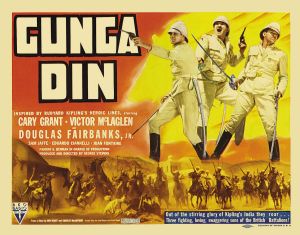 “Eight feet away from where I’m sitting, right here, there’s enough gold to make me sole owner and proprietor of a pub as big as the Crystal Palace. Best pub in Hampshire.”

Gunga Din is a movie title I’m pretty sure I’ve been aware of most of my life.  Gunga Din starts Cary Grant, an actor I’ve definitely been aware of most of my life.  The year it came out, the only movie to make more than Gunga Din at the box office was Gone With the Wind.  By rights, Gunga Din is a classic I should be a lot more aware of than I was before today.  But the truth is, before today, I knew exactly nothing about it, except its title.  So, what is Gunga Din?


The British imperialists are having their way with India in the late 1880s.  Those imperialists are represented by three central soldiers.  The roguish Cutter (Grant), the sensible Ballantine (Douglas Fairbanks Jr), and their gruff Sergeant, MacChesney (Victo McLaglen).   MacChesney is annoyed by everything, Ballantine is leaving the army to marry his sweetheart (Joan Fontaine as Emmy), and Cutter has a map leading to an immense treasure if Indian gold.  A map provided by the titular Gunga Din (Sam Jaffe). END_OF_DOCUMENT_TOKEN_TO_BE_REPLACED
Loading Comments...