In a nutshell, Bored & Dangerous says: “I started this review lamenting the loss of Tom Hanks the funny guy to Tom Hanks the serious actor.  But Joe Versus the Volcano is great example of Hanks delivering both.” 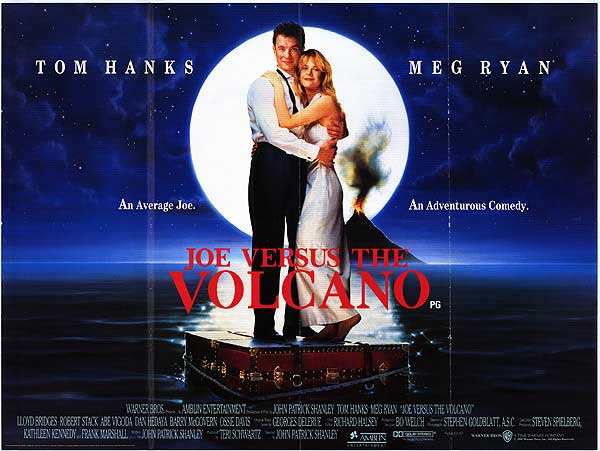 Tom Hanks is great.  Tom Hanks has won a couple of Oscars, been nominated for a couple more and deserves all the praise he gets.  And as much as I like pretty much everything he’s done in the last 20 or so years as a legitimate, A-lister who makes prestige stuff, I also kind of miss the goofball Tom Hanks that we saw all the time before then.  The bloke who made Big, The Money Pit and Turner and Hooch.  The bloke who made weird stuff, like Joe Versus the Volcano.

Working a miserable job for a miserable boss (Dan Hedaya) in a miserable factory famous for being the home of the anal probe, Joe Banks (Hanks) is, well, miserable.  Constantly feeling awful, he goes to the doctor (Robert Stack) for what is clearly just the latest in a long history of visits.  Joe’s usual symptoms are purely psychosomatic, but the doctor does find a brown cloud.  A condition that means Joe has only a few months to live.  Feeling somewhat liberated, Joe quits his job and asks out his cute colleague DeDe (Meg Ryan).  The date doesn’t go so well and Joe’s short moment of freedom is over.

Until he’s visited by rich industrialist Graynomare (Lloyd Bridges).  Graynomare wants to mine a mineral found on a particular South Pacific island, but the natives believe their god needs to appeased with a sacrifice into their active volcano before the mineral can be extracted.  Graynomare has a proposition for Joe.  He’ll finance Joe’s remaining months of health, letting him live large.  Then Joe, with his own death by brain cloud imminent anyway, will jump into the volcano.  Joe accepts the offer and first heads to LA, where he meets Graynomare’s flibbitergibbit daughter, Angelica (Ryan again).  Then it’s an ocean journey, captained by Grynomare’s other daughter, Patricia, (Ryan once again) to take Joe to the island where he will meet his fate.

Joe Versus the Volcano is a rare movie that manages to combine goofball elements, with legit darkness.  When we meet Joe, his life really is in the shitter.  And the rest of the world around him doesn’t look much better.  Add to that a terminal diagnosis and suicide being seemingly the only option, and it doesn’t seem like you’re gonna have a real knee slapper on your hands.  But between the surrealistic, heightened world created by writer/director John Patrick Stanley, and the infinite charm of Tom Hanks, the darkness never overwhelming the goofballness.

The other real strength is Meg Ryan.  I’ve always assumed she was a decent enough actor, but I’ve never thought of her as a funny actor.  In Joe Versus the Volcano, she plays three different characters, and Ryan makes them all totally unique, and funny in their own ways.

Other Opinions Are Available.  What did these people have to say about Joe Versus the Volcano?
The A.V Club
Roger Ebert
Mutant Reviewers