In a nutshell, Bored & Dangerous says: “One of the most important records in rock and roll history.”

When people talk about the origins of punk rock, bands like The Ramones, The Sex Pistols and The Clash are usually pretty quickly mentioned.  Here’s the thing, I like the Ramones, but I think they basically just sped up and turned up classic 50s rock n roll.  And I think The Sex Pistols were basically nothing more than a manufactured boy band, not much different to New Kids on the block or One Direction.  But The Clash, they’re a band I can get on board with being hailed as pioneers.  Not just in punk rock, but in rock in general.  So, I decided to make my way through their catalogue for Bored and Dangerous, starting where they did, with their eponymous debut, 1977’s The Clash.

With its urgent, impatient drums and Joe Strummer’s just as urgent vocals, Janie Jones is a pretty amazing way for a band to kick off their debut album.   It might not be as loud, or fast, or heavy as punk would become, but that doesn’t mean it lacks any of the attitude or energy.   It sets such an urgent tone, Remote Control comes off as almost restrained and pretty in comparison.  In two songs, this fledgling band pretty much justifies being the revered icons they have been for almost four decades.

I’m So Bored With the USA may have some timeless things to say about what’s no so great about America, but the real stand out of the song is the guitar work of Mick Jones.  He often gets overlooked as everyone rushes to gush over Strummer, but I find Mick Jones’ knack for guitar hooks one of the absolute best things about The Clash the band, and only three songs in, it’s also one of the best things about The Clash the record.

Everything is cranked up a notch for White Riot.  It’s got a simplistic, straight forward,  Ramones-like approach to basic riffs and rhythms, but the genuine anger and frustration of these English lads makes it feel immediately more important than the tossed off novelty of your average Ramones song.

On its own, Hate & War doesn’t really do anything to distinguish itself from the songs that came before it, but I think it might be the first Mick Jones fronted song on The Clash, therefore, the first Mick Jones fronted song unleashed upon the world.  And that alone makes it worth highlighting.   Looking at the credits, Jones gets co-writing credit on Remote Control, but it’s a real group effort when it comes to vocals.  Hate & War sounds like it’s all Mick.

While there’s a clear, undeniable rebellious fuck you throughout The Clash, London’s Burning and Career Opportunities sound like the passion and rebellion could overcome the songs at any moment, and they band is doing everything they can to keep the songs contained enough to get them down on tape.

While I’m a big fan of ska, I still cringe at the thought of white guys doing reggae.  With Police & Thieves, The Clash prove that they’re one of the few pale bands up to the challenge.  It still has plenty of their punk rock sneer, and never comes anywhere near trying too hard to appropriate something. 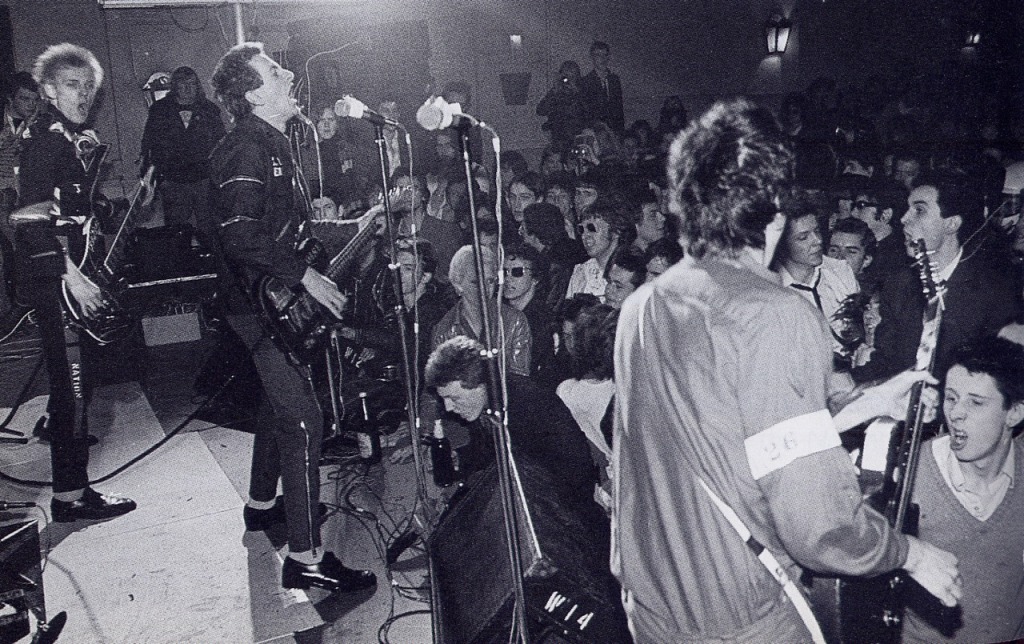 At this stage, The Clash are too revered and too entrenched in pop culture for me to be really be surprised by anything great on The Clash.  But that never stopped it from being anything less than awesome.  They’d go on to write more sonically and musically ambitious songs.  They’d go on to tackle bigger issues in bigger ways.  But that never stops The Clash from feeling like one of the most important records in rock and roll history.

Other Opinions Are Available.  What did these people have to say about The Clash?
The BBC
Adrian’s Album Reviews