In a nutshell, Bored & Dangerous says: “There’s something about McCarthy’s script, and the performances that stop The Visitor from ever disappearing up its own ass.” 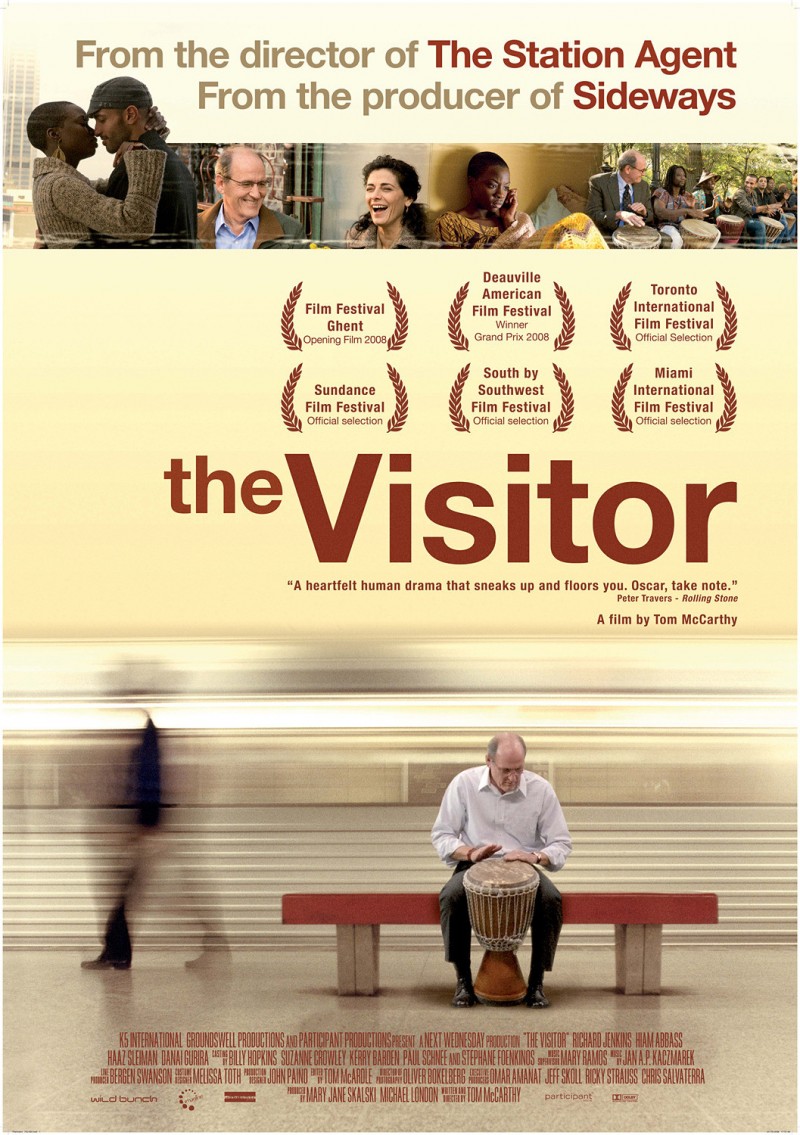 “He was a good man, a good person. It’s not fair! We are not just helpless children!”

A month or two ago, director and writer Tom McCarthy walked away with a Best Picture Oscar for his movie Spotlight. I loved Spotlight and would have been totally fine with it winning every category it was nominated in. Especially since that would have meant beating the totally over rated The Revenant. I also love his directorial debut, The Station Agent, and have heard good things about his 2011 movie, Win Win. And now that I’ve just watching Tom McCarthy’s The Visitor, I know I need to see everything he’s ever made.

Walter (Richard Jenkins) is lonely and aimless after the death of his wife. He barley keeps busy by teaching one college class a semester in Connecticut, while claiming to be working hard on writing a book. He’s called out for his aimlessness when the college insists he goes to New York to give a presentation based on a paper he co-authored. He reluctantly gives in and heads back the New York apartment he shared with his wife, but hasn’t set foot in for years. It’s been so long, a shonky conman has claimed to be the landlord and rented it out to illegal immigrants, Syrian Tarek (Haaz Sleiman) and his African girlfriend, Zainab (Danai Gurira).

After the initial shock from all parties concerned and the truth is revealed, Walter invites the young couple to stay while they arrange new accommodations. Zainab is cynical, but Tarek has a wide eyed optimism and belief in humanity that sees him enthusiastically accepting Walter’s offer and convincing the reluctant Zainab to do the same. Walter and Tarek form an almost instant bond, strengthened by Tarek’s passion for playing tribal drums. A passion that Walter soon shares. One day, as the two rush home from a bongo session in the park, a misunderstanding sees Tarek arrested at a Subway station. But the misunderstanding is a moot point once he is processed and the authorities discover his illegal status.

Writing that description, I started second guessing how much I really, really loved The Visitor. It sounds like such a terrible indie movie cliché. The old, sad guy, being taught to embrace life and rediscover happiness thanks to a magical, drum banging foreigner. But there’s something about McCarthy’s script, and the performances from everyone involved, especially Jenkins and Sleiman, that stop The Visitor from ever disappearing up its own ass.

It’s the kind of story that could seem way too written, way too contrived, trying way too hard. But these actors all make it seem so real. Walter’s depression and loneliness is technically nothing new to cinema, but Jenkins makes it feel like an actual person, not an actor playing a character. On the page, Tarek could seem like nothing more than an opportunist, but Slieman makes him so genuinely optimistic, that you believe he’s just guy who expects the best from others, because he himself only ever offers the best.

In my intro to this review, I said that The Visitor makes me feel like I need to see every Tom McArthy movie. Technically, that should be pretty easy, there are only two or three more out there for me to tick off. But one of those is the Adam Sandler cinematic abortion The Cobbler. I say that knowing nothing about the movie except what I vaguely remember from bad reviews a year or so ago. And you know what, McCarthy has been so good so far with everything else I’ve seen, I’m not even dreading The Cobbler… Much.

Other Opinions Are Available. What did these people have to say about The Visitor?
The New York Times
The Guardian
Film-O-Nalisys