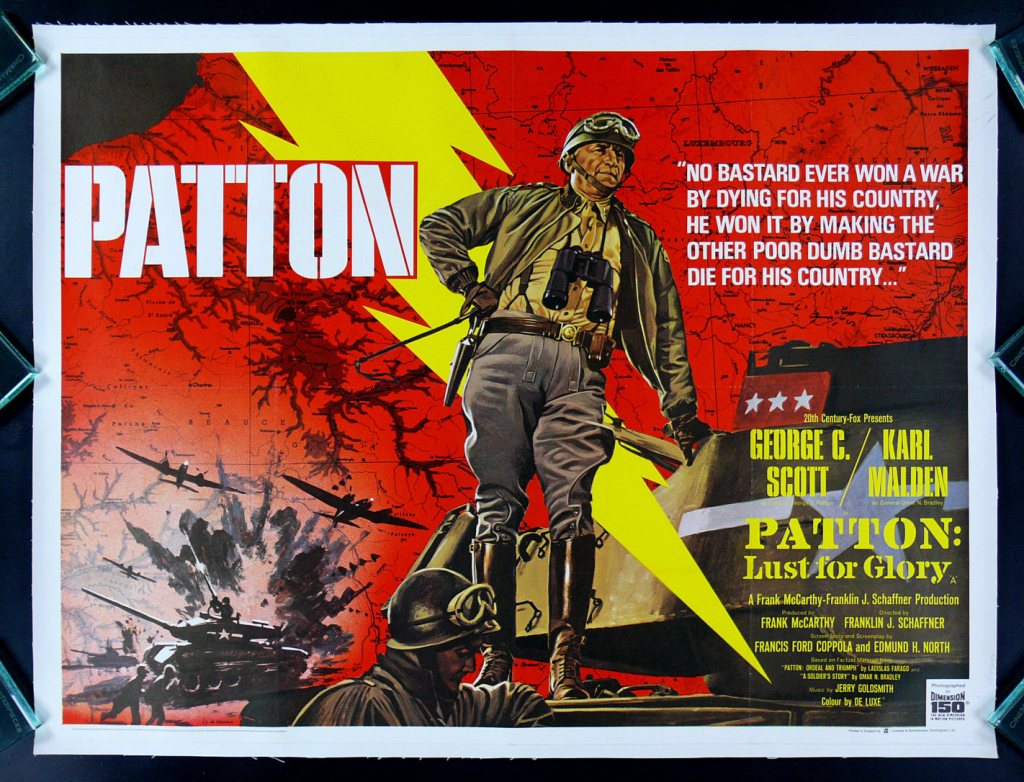 Before he was regarded as one of the greatest directors of all time, Francis Ford Coppola was already an Oscar winner. And the fact that he wrote a screenplay for Patton, won an Oscar for it, and that is well down the list of reasons people remember this movie, is a testament to just how may reasons there are to watch Patton.


It‘s 1943 and the Americans have officially entered the Second World War. After their first salvo into the fray is a massive defeat in Africa, General George S Patton (George C Scott) is given command and tasked with whipping them into shape. He does this through a strict regime of zero tolerance when it comes to soldiers acting like soldiers, and soon the American have their first major victory over the Germans. With old friend and fellow General Omar Bradley (Karl Malden) by his side, Patton leads his units through Africa and is a major force behind an important win in Sicily.

While he expects absolute and unquestioned obedience from everyone under his command, Patton has trouble offering the same sort of blind allegiance to his own superiors. Despite his many victories, too many come at the expense of blatant in insubordination and flat out ignoring of orders. So when Patton slaps a Private in front of plenty of witnesses, the army use it as an excuse teach him a lesson and sideline him from the front line action.   But everything that comes before this makes it clear that general George S Patton is the kind of man who won’t stay sidelined for long.

The character of Patton is nothing new. But the way the movie of Patton tells his story, it’s still totally riveting and stirring and fascinating in every way. Gorge S Patton is a classic story archetype. The kind of person whose biggest success and most devastating failures are all thanks to the exact same character trait. Hubris is Patton’s biggest strength and most glaring weakness. And George C Scott personifies it in such a way that even when the character is at his egotistical worst, you still kind of understand why he believes in himself so much.

And that is also in large part thanks to Karl Malden. The calming presence, the softly spoken voice of reason that made him so great in A Streetcar Named Desire, On the Waterfront and The Cincinnati Kid is also what him and the character of Patton so believable here.   Omar Bradley’s clear admiration and respect for his old friend is so concrete and unflinching, even when Patton is at his worst, that dedication rubs off on the viewer as well.

Patton starts big, with one of the most iconic visuals in cinema history. And it sustains that for the next three hours. There are the performances from Scott and Malden, there’s the perfect screenplay form Francis Ford Coppola and Edmund H North, and there’s the direction of Franklin J Schaffer somehow holding all of these big personalities, big performances and big story together in a way that perfectly balances the lot.

Other Opinions Are Available. What did these people have to say about Patton?
Roger Ebert
Variety
Falcon at the Movies