The main reason I started this blog was to make me watch more movies, and to vary the kinds of movies I watched. The first part of that has been well and truly accomplished with me watching hundreds of movies for the first time, instead of falling back on old favourites over and over again.   But l’m not sure if I’ve varied my selections enough. I still watch mainly American movies, with directors, writers and actors that make them a pretty safe bet. So this year, I’m forcing myself to seek out more international movies. With Foreign Language Weekends, every weekend(ish) during 2016, I’ll review two(ish) non-English language movies. 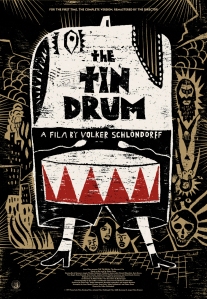 “There once was a drummer. His name was Oskar.”

So, I just watched The Tin Drum. And I really hope that writing this review helps me process what I thought of it. Because right now, I’m struggling.

At the turn of the 20th century, an arsonist is running through the Polish countryside, pursued by police. He hides under the many skirts of a potato farmer which leads to an affair and the birth of their daughter, Agnes (Angela Winkler). After World War I, Agnes marries a local man, Alfred (Mario Adorf), while also having an affair with her cousin, Jan (Daniel Olbrychski). When her son Oskar is born, the identity of the father is unclear, but all three adults help raise him in a surprisingly amicable agreement.


For his third birthday, Oskar (David Bennent) receives a tin drum that he becomes obsessed with playing. Later that night, when he sees the illicit details of his mother and Jan’s still burning affair, he is disgusted by the world of adults and declares that he will never grow any bigger or older. He will remain three forever. Throwing himself down the cellar stairs somehow makes his wish come true.

Over the next 18 or so years, Oskar faces the changing face of Poland, the rise of the Nazi party, Would War II and dozens of other tribulations as a drum banging three year old. Another side effect of his fall down the stairs is the ability break glass with a high pitched scream. I tacked that line on there because it felt tacked onto the movie as well. I have no idea what the purpose of it was.

I also have no idea if I like The Tin Drum or not. And I think that’s because I couldn’t figure out what the movie was trying to say or be. I know I wasn’t bored by it, but I wouldn’t say I was entertained either. It’s hard to watch a movie with a petulant brat at its centre and not get kind of frustrated by his lack of character growth or arc for two hours. It’s even more frustrating when all of that growth and ac comes flooding in during the last 15 minutes.

Here’s what I do know about The Tin Drum, the young actor playing Oskar is amazing. As infuriating as his character is, I had to appreciate the unhinged emotion and utterly believable performance from David Bennent. Even his voiceover and narration is strangely hypnotic and compelling. Like I said, I have no idea what I just watched and whether or not I liked it, but watching this kid deliver such an engaging performance means I do know it was worth my time.

Other Opinions Are Available. What did these people have to say about The Tin Drum?
The New York Times
Slant Magazine
The Cinematic Frontier