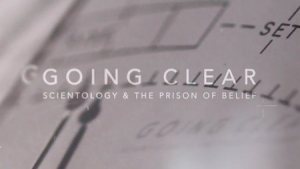 Scientology is a pretty soft target.  It’s some wackadoo sounding bat shit crazy stuff.  And it boasts a lot of the most wackadoo, bat shit crazy people in the world, ie. Hollywood celebrities.  But the thing is, when you look at the stories at the basis of most popular religions, they’re all pretty wackadoo and bat shit crazy.  But for some reason, thousands of years of history makes us more open to the stories of the old school religions, even if we don’t believe them.  As aware of that as I am about my own opinions, I still found Scientology pretty hilarious.  But now that I’ve seen Going Clear: Scientology and the Prison of Belief, it’s less funny and more terrifying.


Made up almost exclusively of talking head interviews form ex-members, we get a history lesson on the evolution of the church, founded in the 50s by WWII veteran, science pulp fiction writer and all around first class liar, L Ron Hubbard.  In some ways his attempts to deal with possible PTSD from the war, in a lot more ways all about making a shit load of cash and paying no tax on it, Scientology was based on a pretty positive idea.  Eliminate all negative thoughts from your mind and negative influences from your life.

The wackadoo, bat shit crazy bit comes in with Hubbard’s insistence that our negative thoughts are actually the souls of aliens left on Earth thousands of years ago.  The terrifying bit comes in when the former members begin talking about the state of the church after Hubbard’s death.  Under the reign of LRH (as they insist on calling him, which came across as really creepy, but I can’t explain why), it just seemed like a cult lead by a crazy, but ultimately well meaning, egomaniac.  It’s after Hubbard popped his clogs that things got really interesting.

Succeeded by church golden boy David Miscavage, things sound a lot more sinister under his leadership.  This is the time when most of the interview subjects rose to high ranking positions in the church.  It’s also when the church began making billions of dollars.  And ultimately, it’s the time when these decades long members began to leave, bringing stories of violence at Miscavage’s hands with them.

The most high profile ex-member to get a lot of screen time here is Paul Haggis, Academy Award winning screenwriter of awesome movies like Million Dollar Baby, Casino Royale.  He’s also the Academy Award winning director of Crash, one of the worst movies to ever get said award.  His story provides a great framework for Going Clear.  From his early exposure, to surprisingly understandable indoctrination, to many years of onblivious happiness, to growing suspicion, to leaving the church, to the smear campaign the church ran against him, like it did so many former members.

I’m not an avid follower of Scientology news, but I have read the odd article over the years.  And while I spent the opening moments of Going Clear: Scientology and the Prison of Belief thinking it was nothing I hadn’t heard or read before, that didn’t last long.  Because while a lot of these stories were familiar, I only knew the broad strokes.  Hearing these people tell their stories in detail, this thing I once saw as a goofy punchline, now seems a whole lot more serious and dangerous.