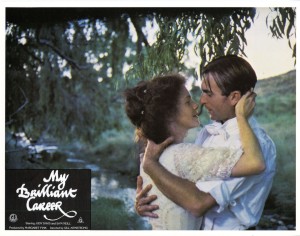 “I think ugly girls should be shot at birth by their parents. It’s bad enough being born a girl…but ugly and clever…”

The Australian cinematic New Wave of the 70s kicked off with Peter Weir’s Picnic at Hanging Rock. It set a tone for a kind of film making and story telling that was uniquely Australian. At the turn of the 20th century, Australia was a strange place. It had well and truly started to form its own identity, but was still well and truly part of the British Empire in a way that meant Englishman were a kind of nobility, and the whites born and raised here were a step below. It was also a time when old fashioned British ways of propriety were still trying to survive in the harsh outback and desert environment that would eventually win out in the end.   It was a fascinating setting for the off putting dreamscape of Picnic at Hanging Rock. And it’s just as fascinating for the more grounded story of My Brilliant Career.


At 16, the confident and defiant Sybylla (Judy Davis) is living in a time and place when confidence and defiance in a woman is seen as a burden. Her parents have decided that they can’t afford to keep her anymore and that she needs to make a living until she can find a husband. But for now, they send her to live with her grandmother (Aileen Britton), uncle JJ (Peter Whitford) and Aunt Helen (Wendy Hughes). Here, she meets pompous English jackaroo Frank (Robert Grubb), and local well to do property owner, Henry (Sam Neil).

Both men are immediately smitten with Sybyll, and while the sensible choice is obviously Frank, who comes complete with a noble British ancestry and large inheritance, it’s the more down to earth Henry who interests her more. But, before any love can be requited, there needs to be a series of situations where Sybyll’s outgoing nature embarrasses her grandmother and charms her uncle.

In 2015, the strong, confident female character doesn’t seem like anything out of the ordinary or groundbreaking. But reading about My Brilliant Career, it was a big deal when this movie came out in the late 70s. Which makes me think it must have been an enormous deal when the original novel was published in 1901.   And as well made and well acted as this movie adaptation is, I had to keep reminding myself about the book’s vintage to keep myself interested in the story.

Watching My Brilliant Career for the first time, it didn’t really stand out to me as anything special. But with the hindsight of when it came out, what the Australian film industry was at the time, and the subsequent careers of some of the people involved, I can appreciate its importance, even if I didn’t necessarily find it all that entertaining.

Other Opinions Are Available. What did these people have to say about My Brilliant Career?
The New York Times
The Guardian
Booklearned