I like Johnny Cash. I think in this day and age, it would be pretty hard to find any adult who doesn’t at least appreciate him on some level. He’s one of those guys who was around long enough to ride the cycle of huge popularity, dismissed irrelevance, and resurgence comeback. And he did it all more than once. But ever since his American Recordings series of records with super producer Rick Ruben in the 90s, it’s been pretty much illegal to not admire the man. Even if his peak occurred decades before you were born. But as much as I admire him, my listening had always been restricted to Best Of and Live collections. So, what does a regular ol’ Johnny Cash album from his early days sound like? It sounds like Blood, Sweat and Tears.


Wringing the most out of American folklore, The Legend of John Henry’s Hammer is a weird combo of staccato energy, and slowed down storytelling and role playing. It’s changes in tempo get in the way making both sections worse for it. Picking one sound or the other would have made for a cool song. Instead, we get two disparate halves where neither gets to shine. At eight and half minutes, that’s a long time for a song to not be good. And when Blood, Sweat and Tears is less than half an hour long, that’s really throwing out the ratio of good to bad on this record.

By the simple virtue of sounding like one song from top to bottom, Tell Him I’m Gone is a huge improvement on Henry’s Hammer. It also doesn’t hurt that it’s such the perfect perspective for a Johnny Cash song. A chain gang worker telling his prison boss to shove it. With a hammer and chain sound driving the beat, it’s the kind of thing that made Cash such a favourite of the less privileged and downtrodden.

The a Capella spiritual sound of Another Man Done Gone takes the feel of Tell Him I’m Gone and ramps it up to even more extreme levels. With a call and response between Cash and a female partner, this story of an escaped convict being strung up for his escape is one of the most haunting songs I’ve ever heard.

Now, as a child of the 80s and 90s, when I saw the song title Casey Jones in the Blood, Sweat and Tears track listing, I was excited to hear what the man in black has to say about the Teenage Mutant Ninja Turtles’ hockey mask clad ally. Alas, it’s a banjo fuelled track about a train engineer. A plucked banjo sound that’s used to even better effect on Nine Pound Hammer. Hearing Cash’s voice sing a lament about the cost of moonshine whiskey in Kentucky is what Cash’s voice was made for. 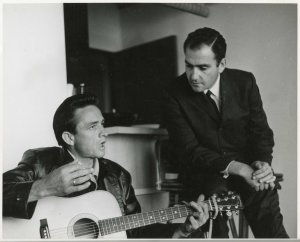 This collection of tales about blue collar shit kickers, work farm prisoners and manual labourers really proves that Blood Sweat and Tears was more than just a catchy album title. It was a real concept that Cash commits to for the entirety of its running time. It’s the kind of thing Cash’s voice, guitar sound and song writing style was perfect for. And after a slow start, this record more than lives up to its promise.

Other Opinions Are Available. What did these people have to say about Blood, Sweat and Tears?
Raise My Glass to the B-Side
Ultimate Twang
Album of the Year