“I met this six-year-old child, with this blank, pale, emotionless face, and the blackest eyes… the devil’s eyes.”


On Halloween night 1968, in small town Illinois, an intruder enters a home and stabs the teenaged girl inside. An intruder that is soon revealed to be her six year old brother, Michael Meyers. Cut to a dark and stormy night 15 years later, and doctor Sam Loomis (Donald Pleasance) is on his way to the insane asylum that has been Michael’s home ever since. Loomis is determined to make sure Michael is never released. When a mishap due to the rain sees an escaped Michael stealing Loomis’ car, the doctor is convinced that Michael will head back to his home town.

A home town now inhabited by Laurie Strode (Jamie Lee Curtis). A model high school student, Laurie spends her nights babysitting while her friends spend their nights sleeping around. On the anniversary of his horrific crime, Michael is back in town, and when Laurie is one of the first people he sees, her resemblance to his dead sister sparks an immediate obsession with her and anyone else she comes in contact with.

Traditionally, horror movies are all about confined spaces and the cover of darkness. Especially slasher horror movies. One of the most impressive things about Halloween is how much tension and fear director John Carpenter can find in bright blue skies and wide opens paces. Close to half of this movie is set outside, in the middle of the day, yet Laurie’s growing fear and paranoia is totally justified as the Michael menace grows and grows, often unseen, just felt. 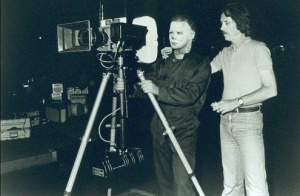 Other Opinions Are Available. What did these people have to say about Halloween?
Roger Ebert
AMC Filmsite
Bad Movie Studios