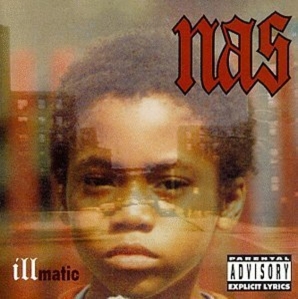 I’m a casual hip hop listener at best.  Then recently, the massive impact of Kendrick Lamar’s To Pimp a Butterfly was too much to resist.  And catching up on some Kendrick was an inevitability I’m glad I gave into.  While talking to a mate who’s a massive hip hop fan, as much as he loves Lamar’s two studio albums, he praised Nas and Illmatic even more.  So since his recommendation on Lamar proved so spot on, there was no way I wasn’t gonna give Illmatic a spin.


Maybe the sketch, or movie sample, or whatever it at the top of The Genesis is there to set some sort of tone for the record to come.  But here’s the thing, like every single sketch in the history of hip hop albums, it’s a totally unnecessary speed bump.  Especially when The Genesis itself is such a strong song, it sets the tone perfectly, without the wasted 30 seconds or so of its prelude.

I don’t know enough about rap to usually be able to recognise eras and sounds associated with those areas.  But as soon as the bass line, the seemingly analogue drums and atonal piano tinkles of N.Y State of Mind kicked in, even I could recognise the 1995 vintage of Illamatic.  It’s also the first example of the easy, natural flow of Nas that makes me start to recognise why I’ve heard this described as one of the best hip hop records of all time.   The production is simple, because it doesn’t need to fill any gaps.  Nas’ rhymes do all the work, the beats just need to make sure they don’t get in the way.

Life’s a Bitch keeps the bass heavy sound going.  Like N.Y State of Mind, everything about the instrumentation that stands out is the bass hook.  And again, it’s subtle, steady, and there to support the vocals.  No need for elaborate funk and fat beats.  The vocals again well and truly take front and centre.  This time with some help from AZ and Olu Dara,

With its record scratching, sung vocal hook, repetitive chorus and looped beats, The World is Yours is the most traditional rap I think people even less familiar with the genre than me would think of when they think rap.  Maybe it’s a sign of my amateur ears for this kind of music, but it’s Illmatic’s biggest highlight so far

And then, as if to make me look like a real dumb piece of shit, Nas serves up Halftime.  He gets a little more assertive with his vocal delivery, the production gets a little complex and layered, and the whole thing comes together perfectly.  All of that is turned up even more on Memory Lane (Sittin’ in Da Park) and it only gets better.

That clear 90s sound returns in full strength on One Time 4 Your Mind and Represent.  And after the fuller sounds of the Illmatic’s mid album suite, this more era specific sound is a great throwback.  What’s the difference between something sounding dated, and something sounding of its time?  Whatever that difference is, One Time 4 Your Mind and Represent have it.

Finishing more than strong, It Aint Hard to Tell is an awesome culmination of all the best bits that comes before it in Illmatic.  Not really a party album, full of big beats or easily chantable choruses for crowds to join in on, it still has a raw energy that’s impossible to ignore.  It’s that lack of easliy digestible hooks that means it didn’t grab me immediately the way Lamar did.  But I also think it hints at a real depth that I’ll appreciate more and more with each re-listen.

Other Opinions Are Available.  What did these people have to say about Illmatic?
Billboard
Rolling Stone
Black Culture TV