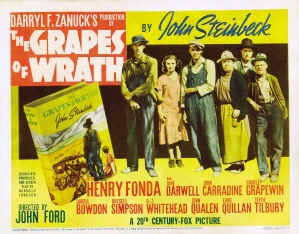 The downtrodden, little guy, fighting back against the man seems like the kind of story that would be as old as cinema itself. How could anyone have ever had a problem with an inspirational story of someone overcoming adversity through their sense of spirit and morality? Well, it turns out that America was so insane with their fear of communism, that there was such a time when a story like this wasn’t seen as inspirational, but instead seen as pro union, commie propaganda. It’s hard to fathom now, but there was a time when The Grapes of Wrath, an undisputed all time classic, was seen as subversive and dangerous.


Making his way home from a stretch in the pen after killing a bloke in a drunken dancefloor fight, all Tom Joad (Henry Fonda) wants is to live the quiet life, working his family’s farm. But while he’s been on the inside, the Great Depression has hit hard, and the once fertile Oklahoma land farmed by Tom’s family, has become a desolate dust bowl. Tom arrives home just in time to see the bank foreclose on their land and his family put out on their asses.

After hearing of work in California, the several generations of Joads, most notably Ma Joad (Jane Darwell), are loaded onto their dilapidated old truck as they head west, looking for work and salvation. Along the way, they realise that they’re not the only ones. Caravans of Okies have had the same idea, and the highway isn’t always the friendly.   The rest of America is suffering too, and every truck load of nomadic farmers that arrives in their town just means more mouths for the local industries to feed. Even worse is the treatment from industrialists, all too happy to exploit these desperate people, and play them off against each other.

The Grapes of Wrath has a large ensemble at its centre. Including Jane Darwell who scored an Oscar for her role as Ma. It has one of the most successful directors in the history of Hollywood at the helm with John Ford, who also picked up an Academy Award for this picture. But nothing in this movie comes even close to equalling Henry Fonda’s performance as the tortured, principled Tom. So much of the story and dialogue is over the top and melodramatic, yet Fonda makes it seem so real and natural.

The other surprising thing about The Grapes of Wrath is how relevant it is three quarters of a century later. We’re still only a few years out from the last Global Financial Crisis and the issue of cheap labour and migrant workers is getting plenty of attention as the U.S ramps up to their next election. Is that a sign of how timeless John Steinbeck’s story was, or of how little has changed in the years since?

Other Opinions Are Available. What did these people have to say about The Grapes of Wrath?
The New York Times
Variety
Coolsville