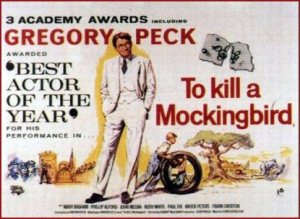 “Neighbors bring food with death, and flowers with sickness, and little things in between.”

“Message” movies are often boring.  “Important” movies are often pretentious.  “Classics” of decades ago often become dated and irrelevant.  But every now and again, a movie’s message stays compelling.  Its importance never falls into self-importance.  And it stays relevant an immediate long after its release.  And that’s what made me love To Kill a Mockingbird far more than I ever anticipated.


Based on the semi-autobiographical novel by Harper Lee, it’s a story of childhood, and racial intolerance in 1930s Alabama.  Told from the point of view of the six year old Scout (Mary Badham), younger brother of Jem (Philip Alford), and daughter to local idealist lawyer, Gregory Peck in probably his most iconic role, as Atticus Finch.  Over their summer, Scout and Jem befriend a young boy staying next door named Dill (John Megna).

While Atticus is defending Tom Robinson (Brock Peters), a black man accused raping a local white woman, the seriousness of this story is juxtaposed with the carefree summer fun of the three kids.  Their main obsession being a creepy house in their street, where the mythical Boo Radley (Robert Duvall) lives.  Eventually though, the stories begin to intertwine and the real point of To Kill a Mockingbird starts to poke through.

I don’t know if it’s intentional, or just the result of shooting on a sound stage or black lot, but the stagey nature of Scout’s neighbourhood really works to build the idea of this small, tight knit community.  Everyone knows each other, it’s totally understandable that Atticus would let his kids wander unsupervised all day and into the night.  And being surrounded by the happy houses makes the creepiness of the Radley home all the more menacing.

The casting of Badham, Alford and Megna as the core trio of kids is pretty amazing.  There are times when they’re acting is a little stilted and awkward, but it’s more than made for by the way they interact with each other so naturally.  The way Scout and Jem can so naturally, quickly and easily go from easy affection to casual aggression, to obvious awe of each other, often for no reason, just seems so accurate to how young siblings are.

After recently watching Infamous and knowing that Dill was based on Truman Capote as a young boy, Megna seems like such a perfect choice.  He’s cocky and a braggart, but you know it’s all in self-defence to hide a sad, lonely little boy.  If the portrayal of the adult Capote by Toby Jones in Infamous was anywhere close to accurate, the portrayal of the young Capote / Dill seems absolutely spot on too.

Atticus Finch is a character that pops up whenever there’s a list of greatest / most inspiring / most memorable movies characters, and after watching To Kill a Mockingbird, that makes sense.  He could have so easily been a one dimensional good guy who only ever does the right thing.  But that’s boring.  Peck makes sure we see the struggle.  He does the right thing because he was always going to do the right thing.  But it’s somehow not as cut and dry as that.  You can see the wheels turning, the almost torment he goes through, knowing that doing what’s right very rarely leads to a happy ending.

Other Opinions Are Available.  What did these people have to say about To Kill a Mockingbird?
Roger Ebert
The New York Times
The Sporadic Chronicles of a Beginner Blogger