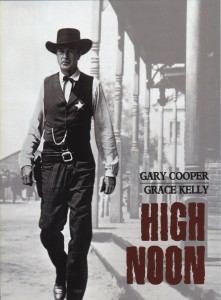 “You risk your skin catching killers and the juries turn them loose so they can come back and shoot at you again. If you’re honest you’re poor your whole life and in the end you wind up dying all alone on some dirty street. For what? For nothing. For a tin star.”

50s Hollywood was a rough time.  Professional nut job, homophobe, alcoholic and senator, Joe McCarthy had decided the commies were taking over and they were doing it through the pictures.  Writers, directors and actors were being blacklisted left and right for either being suspected reds, or for refusing to name names of those who others suspected of being reds.  High Noon is a great movie regardless of when it was made or the issues it was tackling.  But when I read that it was a big screw you to McCarthyism, made at the height of McCarthyism, High Noon became nothing short of phenomenal.


Three outlaws, lead by Sam Fuller (Harry Morgan) ride into a small western town.  The reactions of townsfolk make it obvious that these three men are notorious ‘round them parts.  But not nearly as notorious as their former leader, Frank Miller (Ian MacDonald).  Miller’s gang was broken and Miller arrested by local Marshal Will Kane (Gary Cooper).  At first sentenced to death, Miller’s sentence was later reduced to life in prison, and now, it turns out he’s been released early and is on the next train to town, due at midday.

This time around, Miller shouldn’t be Kane’s problem.  On the very same day that Miller is due to arrive, Kane marries his beautiful young sweetheart (Grace Kelly as Amy) and hands in his badge.  Kane is leaving to live a peaceful life where his job doesn’t involve carrying a gun.  Only, his replacement is still a day away.  So when Kane learns that Miller will arrive in less than two hours, he decides it’s his responsibility to stay and keep the town safe.  Going from one end of town to the other, he quickly realises the help of other townspeople isn’t quite forthcoming.   Especially from his young deputy (Lloyd Bridges as Harvey Pell), bitter about being passed over as Kane’s replacement.

Told in almost real time, High Noon plays out in the 90 odd minutes between finding out that Miller is on his way, and Miller’s train arriving.  That real time depiction makes every minute seem so vital, and every single desperate request Kane makes for help all the more desperate.  It also makes High Noon one of the most intense and anxious movies you’ll ever see.

When the final, inevitable shootout finally arrives, the intensity has been ratcheted up to such a degree, that just the thought of it being released is already a great payoff.  Almost like it doesn’t matter who lives or dies, any ending would be better than living with that lump in your throat as you wait even a second longer.  And if that doesn’t sound like something you might enjoy, remember this, High Noon also stars an amazing smoking hot Grace Kelly at possibly her most amazingly hot.

Other Opinions Are Available.  What did these people have to say about High Noon?
The New York Times
AMC Filmsite
Wonders in the Dark