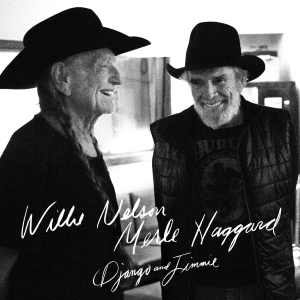 Willie Nelson has released a whopping 70 studio albums in 53 years.  Not quite up there, but still pretty staggering is Merle Haggard’s discography of 49 studio albums over a 50 year span.  That’s over a century of combined experience and well over 100 records.  Not to mention literally hundreds of live releases, best ofs and compilations.


All of that is to say, at this stage in their lives and careers, Willie Nelson and Merle Haggard have nothing to prove professionally.  Which means these days, they’re making music for the pure love of it.  And the idea of these two old friends getting together to make an album just because they can, makes me immediately excited about Django and Jimmie.

Straight away, Alice in Hulaland and the title track make it obvious that this is a real collaboration.  This isn’t two people coming together with a handful of songs each, then just throwing them together and hoping for the best.  Both songs were clearly written as duets, and both written to Nelson and Haggard’s individual strengths.

While they have the confidence to write for their age and older voices, that never means Django & Jimmie sounds old or stuffy.  There are no pounding drums or ripping guitar solos.  But a song like Don’t Think Twice, It’s Alright still wrings plenty of life an energy out of its acoustic guitars, pedal steel and light snare drum.  But when they do bring the ruckus, in a real country rocker like It’s Only Money, these two old boys prove they still have plenty of life left in them.

A song with a title like Missing Ol’ Johnny Cash could be cheesy nostalgia, or a cheap cash in on someone else’s legacy, but knowing that Willie and Merle knew Cash and were friends with Cash, it comes with an instant legitimacy.  And the fact that they make it a joyful, happy, celebration of a song, instead of a mournful lament, makes it all the better.  Even a line like, “Shared the stage for many a show, broke my heart to see him go.  Cash had the fire of a thousand men, lovin’ life was his greatest in. Treated his fans like the next of kin”, comes off us a fond look back at the good times, not a teary sobfest.

Django & Jimmie delivers exactly what I hoped it would, two old friends getting together to make an album just because they can.  I love that it sounds like a true collaboration, and that it’s two dudes who have figured out how to let their music age gracefully, but still stay vital.