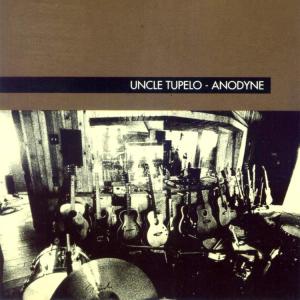 Back in the mid 90s, the cool kids discovered the then fledging band Wilco.  In the early 00s, a much bigger audience got on board with Wilco via the now considered classic Yankee Hotel Foxtrot.  I was in the loop enough to know that album was a watershed moment, but I wasn’t in the loop enough the understand why when I listened to it.


Six or seven years later, I saw a documentary covering the making of that album.  Something about watching I Am Trying to Break Your Heart flicked a switch, and immediately I understood all the hype around that album, that band, and main song writer Jeff Tweedy.  In the years since, I’ve caught up on Wilco’s earlier albums and immediately listened to new ones on release.  I’ve seen the band live and am on board with anything Wilco or Tweedy related.  Including finally catching up on Tweedy’s pre-Wilco outfit, Uncle Tupelo with Anodyne.

Acoustic guitars, fiddles and mandolins, the opening duo of Slate and Acuff-Rose make a great case for the influence Uncle Tupelo obviously had in the bands that came after.  I don’t know if alt-country and people like Ryan Adams were a thing in 1993, but I know they certainly became a thing in the years after.  And I have to assume that Anodyne is a big reason why.

On The Long Cut Chickumunga, they let loose with some genuine ass kicking, good ol’ country rock.  And while my intro to this review may have been all about Tweedy, everything on Anodyne so far is making me think that Uncle Tupelo co-songwriter and singer, Jay Farrar, is the great forgotten talent of this band.  Sure, Farrar’s been in a few bands and released plenty of music in the years since, but Tweedy’s the one touring the world, playing to enormous crowds.

As I listened to New Madrid (and later Steal the Crumbs), all I could think was, jeez, I hope the Avett Brothers send each and every Uncle Tupelo member thank you cards and the occasional royalty cheque.  Because without Uncle Tupelo, I’m really not sure there’d be such a thing as hipster friendly country music.  Further to those who should have Uncle Tupelo on their Christmas card list, if you were to crank up the volume and rock attitude just a little in Fifteen Keys, you’d have Zac Brown Band.

While Wilco have dabbled here and there in country, it’s always been held at an arm’s length.  When it comes to Uncle Tupelo, I think the term alt-country is a little inaccurate.  These guys are straight up good country.  It’s just country without the corny twang people assume country has, without ever listening to good country.