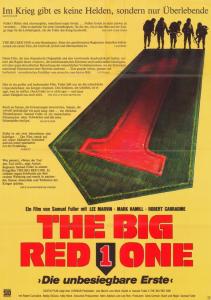 “Saving that Kraut was the final joke of the whole goddamned war. I mean we had more in common with him than all our replacements who got killed whose names we never even knew.”

Lee Marvin is a Hollywood legend who I recognise, but I’m not sure if I could name a single one of his movies off the top of my head (and it turns out I’ve even written about one here).  l know what he looked like, I know the general persona he brought to a role and I know he’s pretty awesome.  So why haven’t I seen more of his movies?  And if I was gonna make concerted effort to see more of his work, shouldn’t I go back the 50s or 60s?  I probably shouldn’t go to the 80s, one of the worst decades in movie making history.  Yet, that’s exactly what I did when I watched The Big Red One.


Fighting in the First Infantry Division, nicknamed the Big Red One, a ragtag group of soldiers make their way through World War II, from Africa into Europe.  Narrated by Pvt Zab (Robert Carradine), we meet their leader, Lee Marvin as The Sergeant, Mark Hamill as Pvt Griff, and a few others who never made enough of an impression on me to be buggered finding their names of the characters or the actors who played them.

Less one big story, and more a collection of short films about different assaults, ambushes and battles, The Big Red One moves at a cracking pace that makes the two and half hours not nearly as plodding as I was scared it would be.  But the downside of that pace and constant changing of scenario is that it’s hard to ever latch on to any one thing.  Every time I’d start to get handle on a scene and what was at stake, it’d jump to the next one, with new things for me to not understand.

The tone of The Big Red One is just as all over the place as the story.  I really couldn’t tell what it was trying to be.  Sometimes goofily funny, sometimes terrifyingly realistic, sometimes dark and cynical.  Writer/Director Samuel Fuller was in the actual Big Red One, he fought in World War II and apparently a lot of the situations are based on his real life experience.  Which makes it even more disappointing that this movie has no real point of view or coherence.

Fuller might have lived it, and obviously I have no way of knowing how accurate this depiction is, but I do know that as a movie, it never really finds its feet.  Not just in how it doesn’t seem to know how it wants to tell its story, but in that I don’t think it even knows what story The Big Red One is trying to tell.