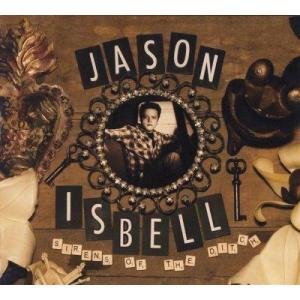 For three albums and about as many years, Jason Isbell was such an integral part of Drive-By Truckers, that his tenure  there is one the most definite and definable periods in that band’s history.  And as important as he was to that time in that band, hearing Isbell’s contributions to A Blessing and a Curse, his last album as a Trucker, it’s clear that he and the band were moving in different directions.  It’s a great album, and Isbell’s contributions are solid, but a lot of those songs sound like they’re from a different band.


Seven years later, he would release Southeastern, an amazingly well reviewed album that would take the newly clean and sober Isbell to a new level as a respected and popular solo artist, singer, songwriter and legitimate headliner performer.  But in between, there were a few years and a couple of albums of Jason Isbell figuring out who he was as a solo artist, singer and songwriter.  The first of those albums was Sirens in the Ditch.

Kicking off with Brand New Kind of Actress, it immediately reminds me of his contributions to A Blessing and a Curse that stood out most.  Isbell always had a more polished sound to his voice and guitar playing than his fellow Trucker song writers, Patterson Hood and Mike Cooley.  Not to say his songs are any less raw or genuine, Isbell just seems to pursue cleaner, more precise sound.

Then it’s time for sludgy, pure blues on Try.  Isbell’s Muscle Shoals home town might be known for soul music, but this song is dripping with Alabama mud and sweat.  While Dress Blues is the kind of stripped back, singer song writer stuff that made a 20ish year old Isbell sound just as world weary as his middle aged comrades in Drive-By Truckers.  Still only 27 when he made Sirens in the Ditch, this is a perfect example of this old soul sound that has been at the core of every great Jason Isbell song.

Those Muscle Shoals origins referred to earlier are on full display in Hurricanes and Hand Grenades.  This is the kind of song that could have been written by Eddie Hinton, then recorded by Aretha Franklin or Wilson Pickett at Fame Studios in the 60s or 70s.  It’s a slow, soulful, piano based lament, perfect for Isbell’s been there, seen it all voice.

Isbell’s heavy country influences shine brightest on In a Razor Town.  The slide guitar, the down and depressing feel, the seeming regret.  It’s got all the ingredients of a real wife left me, dog ran away country classic.  Before things get a bit more soft rock with Shotgun Wedding.

A softly picked guitar to a melody that does real justice to a song title like The Devil is My Running Mate, Sirens in the Ditch finishes on the perfect note of everything I want from a Jason Isbell song and a Jason Isbell album.   No one in their 20s should be able to write music that sounds this lived in.  And the fact that this album came after years of doing just that for Drive-by Truckers, makes Jason Isbell and Sirens in the Ditch all the more impressive.