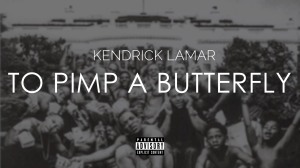 
With its wahed out, synth bass line, and disco-like falsetto vocals, Wesley’s Theory immediately throws a level of funk and groove at me that I don’t remember hearing much of on good kid.  But, when you collaborate with George Clinton, funk and groove are inevitable.  Too bad it’s followed up by one of the most inessential, tossed off songs I have ever heard in my life.  For Free? is as gimmicky lyrically as it is masturbatory in its free form jazz instrumentation.

But To Pimp a Butterfly more than makes up for it with King Kunta, possibly my favourite Kendrick Lamar song ever in my long, rich, week long history of listening to his music.  There’s something vintage about, without sounding like parody or pastiche.

Not that I ever found good kid boring or slow, but there’s definitely more urgency to To Pimp a Butterfly.  Songs like These Walls and Alright just sound more visceral and immediate.   Like they were going to be made no matter what.  Even if Kendrick Lamar didn’t exist, these songs somehow would.

While I normally find songs made up of a lot disparate elements lazy and slapped together, like the artists had three half finished songs, and just frankensteined them.  Momma jumps from one sound to another, each weirder than the last.  But every jump makes it better and more interesting.

Like good kid, To Pimp a Butterfly is a sprawling saga, a concept album telling an epic story.  Apparently.  That’s what people have told me, but my attention span and interest in lyrics is nowhere near long enough or deep enough to notice that kind of stuff.  Even without paying specific attention to that side of things, I still totally feel the complexity and layers of How Much a Dollar Cost and so many other songs here.  The feeling and passion behind them are so real and so intense, you almost don’t need the words to get it.

And just when I thought I had already been blown away by To Pimp a Butterfly, it throws i at me.  On an album filled with highly charged lyrics and a darkness that seems synonymies with that lyrical tone, i keeps that dark edge, while wrapping it up in party jam beat and vocal rhythm that’s more than just infectious.  It’s an epidemic.