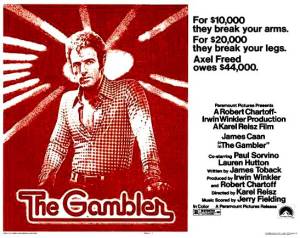 “Ah, quit lying to yourself. Once you ain’t a virgin no more, you’re a whore till you die.”

Movies centered around gamblers and gambling a rarely setups for happy endings.  It’s clear that George Segal and Elliot Gold’s characters in California Split are never gonna have that one big score and be satisfied to quit while they’re ahead.  The instant Gary Bond goes back to the betting ring in Wake In Fright, it’s obvious that barely breaking even financially is the best he can hope for, while losing a lot more emotionally is a certainty.  Movie gamblers rarely win, which is kind of the thrill.  Because like gambling itself, even though you know winning is a long shot, it’s exciting to think that there’s still a slim chance of making that big score.  And it’s that thrill that’s so infectious in The Gambler.


A college literature professor by day, Axel Freed (James Caan) is much more dedicated to his nocturnal profession as a high stakes gambler.  Opening the movie already $44,000 down, Axel has pushed his bookie (Paul Sorvino as Hips) and his credit to the absolute limit.  Axel contemplates loan sharks before swallowing his pride and borrowing money from his mother (Jaqueline Brookes).  Between his mother and his rich grandfather, Axel has obviously felt invincible, with a safety net there when things get really bad.

Only this time, things go from really bad to really worse.  Instead of using his mother’s loan to pay his debts, Axel decides to let it ride a few more times, thinking he can win his way out of debt to his bookie, out of debt to his mother and into fortune.  Along for the ride is his new girlfriend Billie (Lauren Hutton).  At first drawn to the thrill of Axel’s risky lifestyle, the novelty soon wears of as Billie joins the rest of Axel’s loved ones trying to balance their affection for him, with the tough love needed for him to ever beat his obvious addiction.

If you were making a movie in the 70s and needed someone to convincingly portray the confidence and balls of a gambler on a hot streak, as well as the depression and desperation of a gambler running cold, you couldn’t do much better than casting Jimmy Caan.  No matter how clear The Gambler makes it that Axel is headed for the big loss he truly deserves, Caan swaggers through it with enough charisma that doesn’t just make you believe that Axel believes in himself, it also makes you believe that you should believe in him too.  Like obviously that next big win is just around the corner if he can just let it ride one more time.

When this version of The Gambler already exists, I’m not sure what made someone compelled to remake it with Marky Mark.  Form what l’ve seen in the trailers of the new version, Wahlberg looks more than serviceable in the desperate lead role.  But who needs more than serviceable when you already have James Caan doing it this perfectly?

The Gambler
Directed By – Karel Reisz
Written By – James Toback