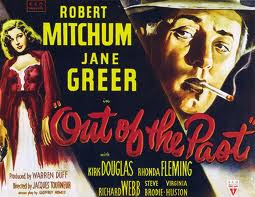 “All women are wonders, because they reduce all men to the obvious.”

The 40s was an awesome time for the hard boiled, no shit taking leading man.  A time when Humphrey Bogart was at his peak, making classics like Casablanca, The Big Sleep and The Treasure of the Sierra Madre.  Movie’s built around men who’d been hardened by betrayal and heartbreak, but were still susceptible to a specific kind femme fatale who they knew was bad news, but got caught up with them anyway.  When I found out there was a movie in that vein, with its hard boiled, no shit taking leading man played by Robert Mitchum, I knew I had to see Out of the Past.


Jeff (Mitchum) owns a service station in a small, podunk California town in the middle of nowhere, living the quiet life with his best girl, Ann (Virginia Huston).  A quiet life that is disrupted when Joe (Paul Valentine) happens to drive through town.  You see, Joe knows Jeff from the old days, when he was a ‘Detective’ for crime boss Whit Sterling (Kirk Douglas).  Through a confession to Ann, we get a flashback to Jeff’s past.

Years ago, Whit’s mistress Kathie (Jane Greer) shot Whit and took off with $40,000 of his hard earned.  Sent to track her down, Jeff eventually finds her in Mexico.  Because she’s dangerous and obviously bad news, Jeff can’t help falling for Kathie as they plan a way to run off together with Whit’s cash.  Things go about as well as expected, leading Jeff to his new life, hiding in a small town petrol station.  But now that Joe has found him, Whit decides it’s about time Jeff paid for his Mexican indiscretion.

Robert Mitchum is a dude who in only a handful of movies has quickly become one of my favourites from this era of Hollywood.  And in that very limited handful, he’s been amazing as the cold, soulless, bad guy.  So to see Out of the Past, with Mitchum as the good guy, was really cool.  Sure, he has a past, he’s done some bad things and made some mistakes, but by the time Out of the Past catches up with him, he’s a changed man who truly wants to be a better man.  And as the story bounces back and forth from one point of Jeff’s evolution to another, Mitchum sells it every step of the way.

This is the kind of story that has been re-told over and over, run into the ground and rehashed so many times that it shouldn’t be entertaining at all.  But there’s just something about Out of the Past that makes it feel like a standard bearer, an originator, a pioneer.  The story may not have surprised me all that much with the hindsight of the last 70 odd years of knock offs, but the execution more than made up for that.